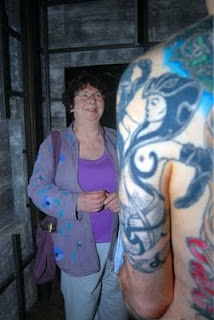 On Friday 28th May Hazel Hammond launched her book of tattoo poetry in Bristol. Her poems are inspired by tattooed people and tattooists. One of them (The Tattooed Man) is based on my story. Present at the launch were many local poets and several of the performers in "Needlepoint" staged at the Tobacco Factory last year as part of the Bristol Poetry Festival. The singer, Suzy Condrad, added to the poetry with her own brand of folk music. One of the most heavily tattooed people at the party was Natalie, a young woman of 21, who already had acquired ink on her arms, legs, chest, back and stomach. Now she's at university she has come to halt because of lack of funds. She's also removed many of her 22 facial piercings, though at least half a dozen remain. She says she has not yet got to the point that she wants to cover all virgin skin and she hopes that unlike me that she won't get to that stage. I wonder what she will eventually do.
Post a Comment
Read more

My half sleeve completed 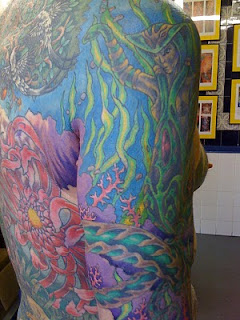 When I arrived Ben Boston had just returned from a dental appointment and had a frozen mouth. But he was undaunted and wasted no time in starting on the coral rocks on my tight arm. I wondered if he had time enough to finish the half sleeve and he did. The angle of this photo shows that in doing so he also completed a small part of my back piece that had been left undone a couple of years ago. Next he will return to my right breast. I asked him if he would look into buying some Vasocaine (http://www.thetattooshop.co.uk/shop/products/tattoo-anesthetic-vasocaine.htm), a product not available to the general public that the tattooist sprays on once he has started his work. It only works on open wounds and I hope would ease the pain when he gets back onto my ribs and stomach.
Post a Comment
Read more

Yesterday I was at the Newport, South Wales Tattoo Convention. It seemed less well organised than last year and in particular none of the body painters advertised were there. This would have been because they did not know they were invited or so it seems after my various phone calls to them in the weeks preceding the event. What was unchanged and is a familiar feature of all the conventions I attend is a samll number of very pretty and heavily tattooed, very visible girls who walk around in the manner of celebrities. They dress to kill and are often very stylised, Betty Boo being one favourite persona they adopt. Several I saw have tattoos on their faces and necks, often beautifully executed. I don't notice any male equivalents. I sense that some girls spotting the priority given on the covers of tattoo magazines or even in the national press to models with tattoos see a role for themselves. They are, in effect, convention cover girls. I saw some lovely work while there
Post a Comment
Read more
More posts