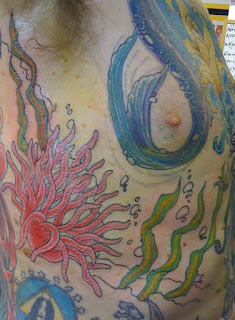 This is not intended to be an advert for Vasocaine and I most definitely don't have any link with the company. Yesterday I used the product for the first time in the hope that the work on my ribs would be less than agonising.

The result far exceeded my expectations. As usual, some Emla cream was rubbed on first. Vasocaine only works as a local anaesthetic once the skin is penetrated so the intial work with the needle was still very uncomfortable. But as Ben Boston, my tattooist, progressed in the same zone the pain quickly lessened until after a while in some areas it almost disappeared altogether. The quantities Ben applied were very small yet the spray transformed the experience.

Ben was enthusiastic because my skin didn't puff up so the ink held well and my lack of discomfort allowed him to work without interruption. He was so impressed that he felt worried about being so pleased and suddenly his mood changed (Ben is a taciturn man so enthusiasm and worry don't feature very strongly in his demeanour) It was as sudden as the arrival of a violent thunderstorm later that afternoon. He said that he believed that tattoos had to be earned through pain and he was confused about how he felt.

But not so confused that he didn't want to try it on his next client. I was happy to agree that he should use my spray and test it out further.

There was one negative from my point of view. When I got home and washed the area tattooed and the anaesthetic was removed as well, then the area inked began to ache more badly than I remember before after a session and lasted several hours. I wonder why this is. Maybe because so much was done so quickly in a tender area it all caught up with me. Let's see what happens next time.