Scratch as you can 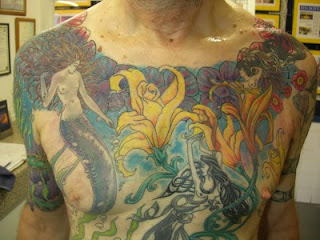 I really did want to break up the expanse of blue on my chest, which looked like a T shirt. So after a longish chat, Ben agreed to create a ring a of flowers that are toned blue, pink and purple based on Art Nouveau. I think it's a very big improvement and also inks a blank area on my shoulders.

Ben was so full of his holiday in Prague, from whence he's returned yesterday it was quite hard to get him to concentrate on the task at hand. But eventually he got going and he used the Vasocaine more sparingly this time, so this was not quite such a pain free experience this time. It will be interesting to see if the discomfort I suffered for several days after the work in my ribs, repeats itself this time.

A few months ago Ben told me he'd seen evidence that "scratcher" activity was increasing in Bristol. Would you believe it but one turned up at his studio during my session with the bare-faced cheek to ply Ben with questions on what equipment to buy and how to use it. Stu bluntly told him there is much antipathy in the professional tattoo community towards this behaviour. He ignored him. Then Ben engaged with him remarkably sympathetically advising him to look on You Tube for videos giving guidance. The man in his forties, who confessed to being a bouncer, was not someone I'd give time of day to. 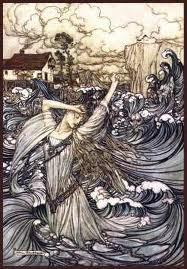 In contrast, Ben's next client was an attractive young woman who is having a large drawing by Rackham tattooed on her back. She showed it to me. It proved again the wisdom of starting with a large piece if you want something worth having and something that can be easily integrated into other work, unlike the work on my chest.