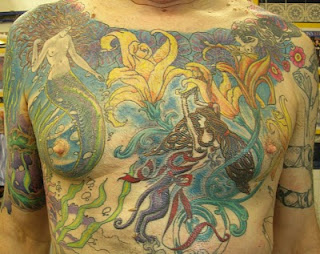 It was time to tackle the central image on my chest, a half woman half cat art nouveau image. The original work was outlined back in about 1998 and strung across my chest and stomach. Now it is being integrated into my body suit and in colour. Ben decided to eliminate the blackness. He says his inks can do that and here is the evidence.

One of Ben's clients is having his head tattooed, having had everything else covered. Half has already been done by another artists but he is asking Ben to do the other half. I wondered if he was likely to want his face covering too after his head is finished. Ben said he didn't think so but if he were asked to such work he'd refuse. He doesn't want to be part of removing someone's identity. I was surprised that he took this stance.