Showing posts from January, 2011
Show All

Am I suffering from body dysmorphia? 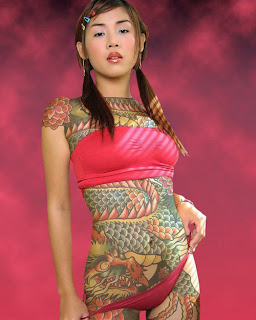 Body suits can look so different one to the other.  The Japanese girl with the body suit in my eyes looks "normal" and not extreme, albeit very unusual.  There is no sense that she dislikes her body.  Whereas the second photos is of another attractive woman who could conceivably suffer from a form of body dysmorphia. She has so radically altered her appearance that she may have done it because she didn't like how she was before.  I think she looks wonderful but then I am hardly coming to that judgement from the same place as the great untattooed or lightly tattooed world. When talking to the students this week, I admitted that I am now in a hurry to eliminate all my pink unadorned skin on my body and that feeling of urgency contributes enormously to my desire to have a bodysuit. I was also asked if all social considerations could be eliminated would I have my face tattooed.  They appeared surprised when I said not only would I like to do that but it was a  matter of s
Post a Comment
Read more

An "extreme" grilling by students 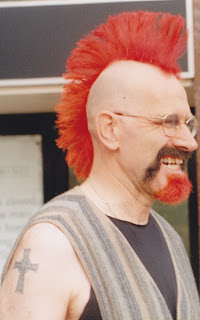 Yesterday I was invited to be one of three to be interviewed by students at a sixth form college in Bristol.  This was to help with their course work on a study of the social issues around body modification.  Hazel, who is a poet and former school teacher has a published book of poems on tattoos.  Damien, like me is tattooed. The students' questions prompted me wistfully to look back to the eight days in 1998 when I got myself a mohican and wandered around the country in less conventional clothes than I normally wear getting reactions to my appearance.  I tried to get a documentary commissioned by the BBC entitled "Judging by Appearances" and nearly succeeded but fell a the last hurdle.  In that week I was photographed by Japanese tourists in Trafalgar Square and by Americans in front of Buckingham Palace.  In the City of London I managed to get myself invited to a merger party of two investment banks and after half an hour was thrown out because of my appearance.  I f
Post a Comment
Read more 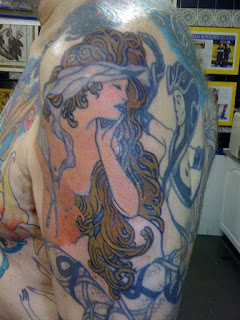 Now I have a respite of a few months from the ribs, while Ben works on my left arm.  Here is much older work of an Alphonse Mucha painting but originally tattooed in black.  Now colour is being introduced and I'm really surprised by the extent to which 15 year old solid black can now become colour.  Most of today was spent on the hair.  The skin tone,which looks rather pink because of the bleeding, took only a tiny fraction of the time. While chatting Ben talked about trend tattoos and how many new tattooists are dominantly doing the old pin-ups, ships, anchors etc.  He thinks that their skills will be severely limited by the narrowness of their ambition as they meet a market trend.  It's hard for me to disagree but as far the consumer choice goes, I think whatever anyone likes or wants is entirely up to them.  If they love the old style flash then that's fine by me.
Post a Comment
Read more
More posts