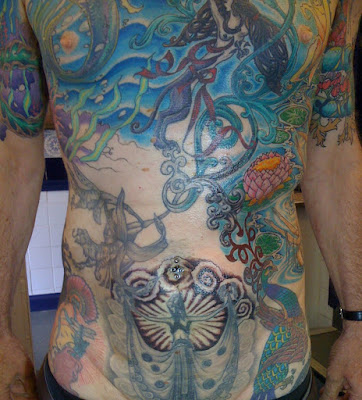 Ben never seems to tackle the area of my body that I expect, so my efforts to use numbing cream in the most effective way are partially thwarted.  The instructions on the tube say that it should be applied in two stages.  First rub in a generous amount on the area to be affected and after that is done then put on another layer. Then keep it all intact by wrapping cling film around.  This should be done 40 minutes before being tattooed.

Unusually for Ben, he was very late finishing the previous customer.  She was having work done on her ribs and I could hear her groaning.  This is a vicious area of the body to be tattooed without the aid of numbing cream and spray.  The consequemce for me was that my work began half an hour late and I was worried that the numbing effect would wear off.  In fact the reverse was the case and in the areas I had applied it I felt almost no pain and did not need the Vasocaine.

My experience of Vasocaine is not altogether positive.  It doesn't kick in until the skin has been pierced by the tattoo needle and even then it takes quite a few minutes and a few sprays to become effective.  When used in sensitive areas, such as the ribs, there is a lot of residual pain that appears once the numbing effect is gone.  This can last a couple of days.  This doesn't seem to happen with numbing cream or if nothing is used.  Nevertheless, when having difficult areas tattooed it can make a very big difference indeed to pain levels.  I shall continue to use it.  I wonder how other people's bodies react to Vasocaine.

Things only went awry when he moved onto my groin and below the navel.  I didn't expect him to work on extending my Louis Malloy tattoo in my pubic area and higher. So it was painful.  Here above you can see what he did.

So the outcome was that I have now learned to be even more lavish with the cream and to be bold enough to take the risk of it not all being used and cover a wider area AND to apply it at least half an hour earlier than I have in the past. 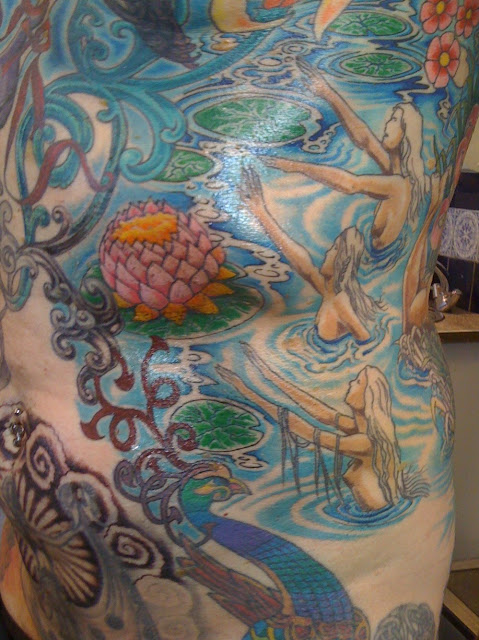 Before that, the lower body was inked and the work on the water lily and surrounding area had to be completed.