My torso gets closer and closer to completion.  A couple more sessions and it will be almost there.

I persuaded Ben that I had enough of the blue background and wanted there to be a sandy bottom to the sea and this is what is now emerging bringing a different colour emphasis.  The tigers coming out of flowers in black (hard to see in this photo) will soon be coloured in too, though they can't be very vivid as they are already so inked in a somewhat faded black.

While being inked a woman of 42 who was getting a piercing peered at my tattoos and exclaimed how much she liked them.  I know they are not everyone's cup of tea but I enjoy having my body art examined.  It can be hard to explain to people and convince them that I am happy for them to look at my body in the same way they would at a picture in an art gallery.  They are possibly inhibited because they are so conscious of me the human being rather than my body the canvas.

How do I know she is 42?  Because her small son was with her asking the open questions that only a child can ask.  She told me her little boy has announced to all of Tesco that his mummy is 42 and has a tattoo on her bum. 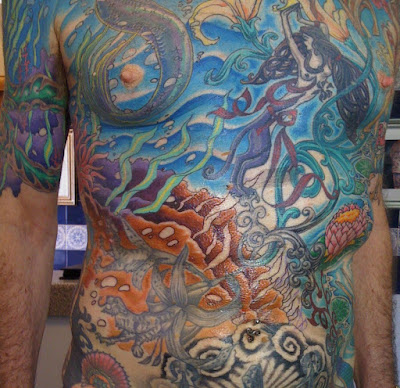