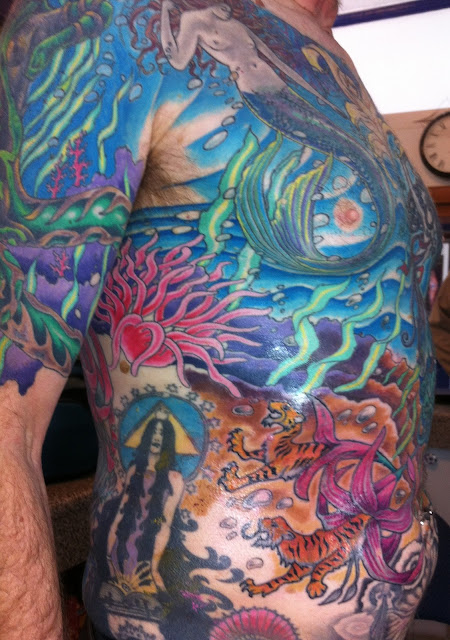 It was a case of ink over ink today.  An art nouveau image tattooed on me in the late 1990s in black has now almost been completely coloured in and relined.  And how much better it looks!  There's just a little left to be done but it brightens up that whole area of my body.
As Ben worked he talked about the number of people with tribal tattoos who were now having it covered.  It highlighted for him the risks of following fashion too slavishly.  I said that we tattooed people do have to beware of that pitfall but it's almost impossible not to pick up what's in the zeitgeist.  I have had some tribal work of my own covered by Ben, when he completed my backpiece and it was tough to disguise it. So I am living proof of his argument. I like to think I'm just doing my thing, but at a conscious or sub-conscious level I'm bound to be influenced by what I see in magazines or at conventions.  We can't help belonging to the culture of our age.  The only safe way is to go with the old traditional forms such as Japanese.  There is no such thing as true originality.  You won't find it on my body.
Ben thought some people will come to regret the work they have.  It's becoming more common for people's first piece of work to be a big one.  I said that I wish I had been that bold and if I had I wouldn't have had all these bits and pieces that have had to be incorporated into my body suit.  Though the risk is if your first tattoo is large and then you decide you are not keen on being tattooed then you've got a much bigger problem.  But that's not how it would have worked out for me though it's inevitable that the more you are tattooed the more opportunity you have to learn about the process and about yourself and what you really want.  No simple amswers.  For people like me a big part of the exercise is to be tattooed.  I want coverage - lots and lots and lots of it. 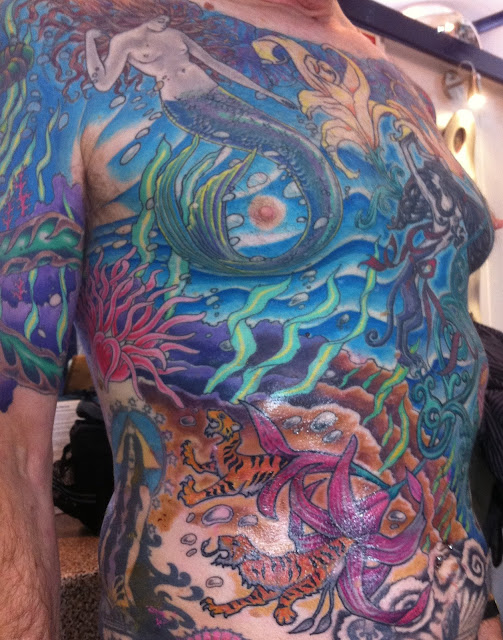