Showing posts from January, 2012
Show All 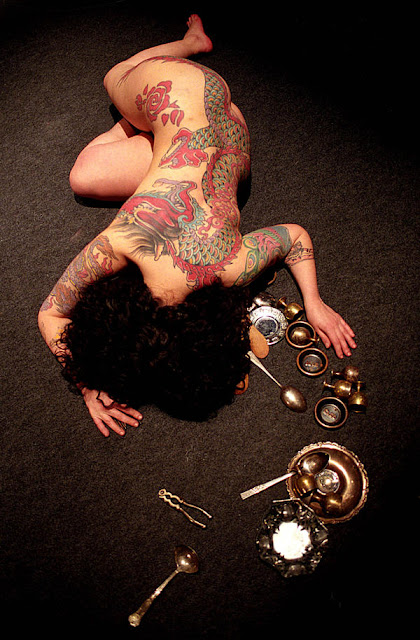 Another tattoo influence in my life is the burlesque and stage performer extraordinaire, Marisa Carnesky.  I went to see her at a small alternative theatre called The Green Room in the centre of Manchester back in about 2003.  She had a show called "Jewess Tattooess".  I wish I could say I can remember what it was about in detail but it's too long ago.  In part it considered how much tattoos are a no-no for Jewish woman but that didn't stop Marisa from going ahead.  At the end of a vivid show of art and dance she stripped.  This she was able to do with the skill of a professional stripper but performed it with artistic taste and integrity.  There is nothing sleazy about Marisa. After the show she came back on stage and chatted to those who accepted her invitation to stay behind.  I talked to her about my tattoos and my desire to be more heavily covered.  I've no idea what she said but she was warm and kind.  Her own art is gorgeous.  I wonder if she has more cov
Post a Comment
Read more 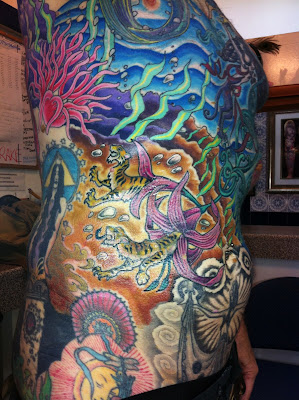 There's not much dramatic to see after today's shorter than usual one and a half hour session.  Ben completed the colouring of the tigers and lilies and then joined up between them and the old Alphonse Mucha tattoo that I had about fifteen years ago.  You see that tattoo on the extreme left with the woman and her blue halo with stars.  Then he began to rework it, but so far only part of the hair has been lightened.  Much to do on that the next time.  Then Ben will do all the hair and go on to re-outline it and freshen up the rest of the work.  The other work you see with the pink fan is also from the nineties with which I was very happy but too will benefit from being relined. The photo is take with my new iPhone 4, as was the last entry.  The quality of colour is much improved from the iPhone 3.  Below is my backpiece taken with my new camera, a Canon Powershot 95.  This is rather disappointing.  I really must get all my tattoo ink professionally photographed before long.
Post a Comment
Read more

I am often asked why did I start getting tattooed and why did I start so late in life?  I was 49 when I had my first tiny tattoo.  When I say it was because of Cher, I get some old-fashioned looks implying how could there be such a naff reason to engage in what some would see as a cool thing to do.  Why be influenced by a woman whose outfit looked more Borat than beautiful. But back in 1991 no one as high profile as Cher had been tattooed and then willing to show her ink as often as she could to the whole world.  In my perception, before Cher tattoos had belonged to the criminal and naval classes.  Suddenly I saw tattoos in a very different light.  Cher was outrageous, exciting and beautiful. These days Cher is having or has had some or all of her tattoos removed saying tattoos are passe, which disappoints me as it suggests that she had them originally as a stunt to attract publicity, not because she thought being tattooed was a fulfilling and significant thing to do. No matter,
Post a Comment
Read more

A film that piqued my early interest in tattoos 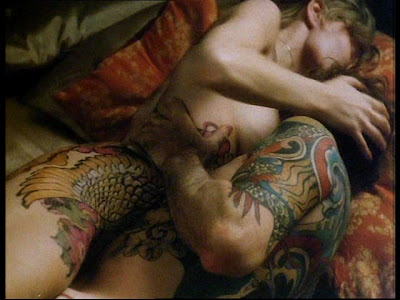 My first interest in tattoos began in the early nineties.  In my curiosity I rented out a film that was already ten years old - "Tattoo" with Bruce Dern in which he plays a somewhat crazed tattooist who decides to drug a a beautiful woman and then while she is unconscious covers her with tattoos.  In my distant memory it was a thriller with a very kinky approach to tattoos.  I found it titillating and troubling at the same time.  I remember that my first wife was very unimpressed by my fascination with the film. This was not a great film, even if the idea behind it was, but whereas today tattoos are ubiquitous and so they are in films too, back then this was a truly unusual theme.
Post a Comment
Read more
More posts