I am often asked why did I start getting tattooed and why did I start so late in life?  I was 49 when I had my first tiny tattoo.  When I say it was because of Cher, I get some old-fashioned looks implying how could there be such a naff reason to engage in what some would see as a cool thing to do.  Why be influenced by a woman whose outfit looked more Borat than beautiful. 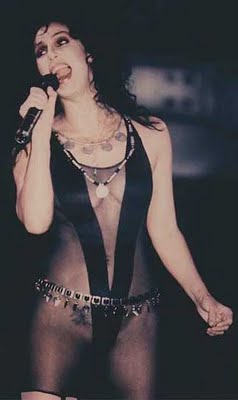 But back in 1991 no one as high profile as Cher had been tattooed and then willing to show her ink as often as she could to the whole world.  In my perception, before Cher tattoos had belonged to the criminal and naval classes.  Suddenly I saw tattoos in a very different light.  Cher was outrageous, exciting and beautiful.

These days Cher is having or has had some or all of her tattoos removed saying tattoos are passe, which disappoints me as it suggests that she had them originally as a stunt to attract publicity, not because she thought being tattooed was a fulfilling and significant thing to do.

No matter, once she engaged my interest in tattoos I began buying magazines and searching for information, including renting out the video of the film "Tattoo", see my previous entry.  Very quickly my pulse was racing and I just knew I had to be tattooed and preferably heavily tattooed.  In the immediate future that was more fantasy on my part than a realistic option as I was working in America for a multi-national Corporation.  If I wanted a career then tattoos were out.  But I had a small dragonfly on my hip inked in Atlanta, Georgia, which I kept carefully as my dark secret.  But as so many others have experienced, once you have one that's not where you stop.