Ben Boston's lesson in how to protect your new tattoo 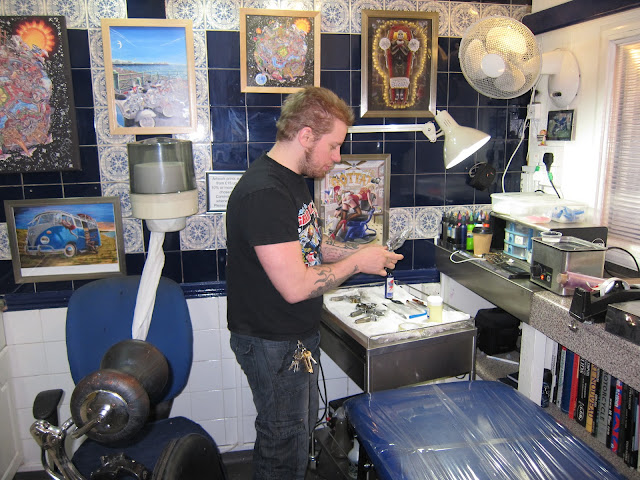 I have often referred to my conversations with my tattooist, Ben Boston.  Well here he is preparing for his next session with me today.  A few minutes later and I was lying on the bench right here as Ben began the recolouring of an old tattoo.
As he did so I commented on the ageing of tattoos - a worry many people have.  I said all you have to do is from time to time get them re-lined and coloured.  But it seems it is not necessarily as easy as that.  Everybody's skin is different, he said, with varying capababilties to absorb ink and the life span of a tattoo is much affected by that.  He has a few clients whose tattoo looks brand new even after a few years.
It also matters how you live your life.  For those engaged in jobs with a manual content, such as lying under cars in a garage or working on building sites with cement and concrete dust around, then the healing of the new tattoo can be seriously damaged.  Then there's the obvious problem of sunbathing.  Don't expose tattoos to the sun at length, especially in the first year of a tattoo's life.
Ben believes women pay far better attention to their skin than men so generally their tattoos will last better and presumably respond better to any reworking.  It is really worth moisturising your skin regularly, especially just before a tattoo session.  The elbow needs most attention.  After the tattoo session go straight home and get a hot facecloth onto the new tattoo and hold it there.  I've always done this.  Repeat this during the first few days.  People will use different ointments, find out what works for you.  The rate that people heal varies considerably too. I use Preparation H, and have no shame in asking for it at the chemist's.
After that treatment with ointment finishes then begin with a moisturiser.  This is going to be hard for me after sixty seven years of not using one. Old dogs and new tricks.  Oh dear. 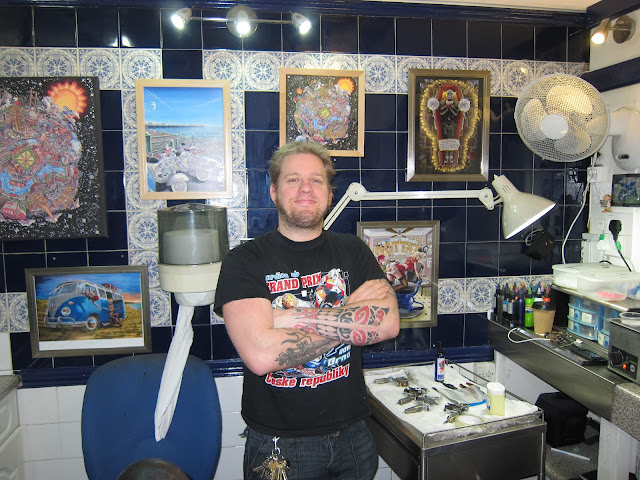