My cover up and a new big bird 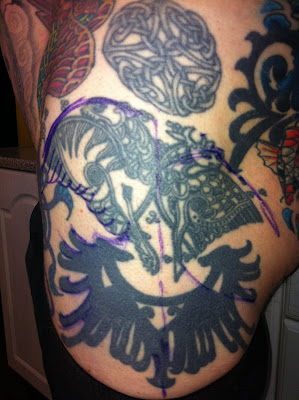 In 1995 I had my first large tattoos.  Before that I had just the very small dragonfly I had acquired in Atlanta.  The top two Celtic designs (see here left) were a big step forward for me into the world of being a tattooed man.  I had them done in Chester in 1995.  I liked the designs but fairly soon my thoughts moved away from Celtic and anyhow I wasn't happy with the positioning of the lower bird-like mythical creature.  It was cock-eyed. Below these two is a tribal tattoo I had a few years later, probably about 1998 in Wrexham.  I still had no clear idea where I was going with my tattoos, though thought I would stay with black.  I had a couple of these tribal tattoos on my backside too, which are now mostly but not entirely covered.  With my torso now complete the time has come to integrate my old work into the new. Last time Ben began work on the hair of the Art Nouveau design on my right hip and that will continue, but on my left hip these images don't work so we have decided to have them completely covered. 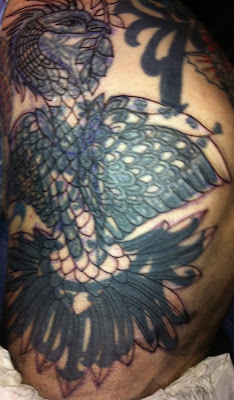 The first step was to draw the new large bird over the three old tattoos.  Here to the right you can just about see the result.  The Celtic knot has the head of the bird in it with an olive branch or suchlike in its beak. The Celtic creature will be the wings of the bird and the shape is almost identical.
The final photo shows that Ben has converted the tribal work into the large tail feathers.  It's not finished yet but you get the idea.  My next session is not until April and until then I will have this mess on my hip.  That's always inevitable with cover ups.  On fresh skin the outline can often look very beautiful in its own right.  But this is not the case.  Logically Ben would return to the Art Nouveau work on my other hip next time but this is much more interesting to him and he wants to carry on with the new bird until it's finished before turning elsewhere. 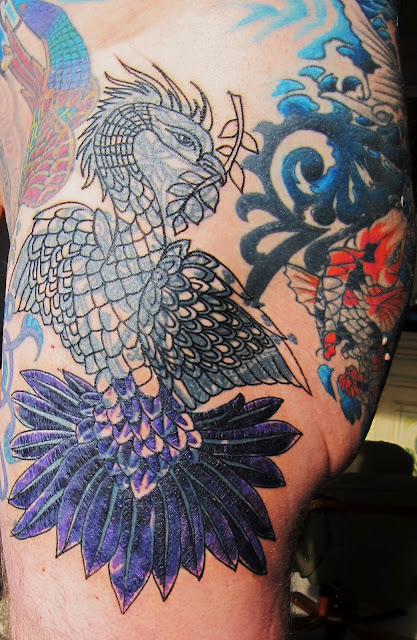 You can see quite clearly the tribal piece on my the left cheek of my bottom that was left uncovered after my back piece was completed so Ben will also have to find a way of dealing with that as he works on the surroundings of my new bird.
On reflection I feel rather sad about the loss of my two Celtic tattoos, because they really represented an important part of my past.  I remember very clearly planning them and having them tattooed.  It was a huge step for me.  The Celtic creature was from a book I bought when visting Stirling Castle in Scotland.  I remember my former wife's dislike of the idea of using that design for a tattoo.  She didn't like my new engagement with this form of body decoration.
I think it was extraordinarily clever of Ben to come up with this design drawn freehand and then tattoo it on my body in no time at all.  It is a remarkable skill.