- March 08, 2012
The former Royal Ballet star, Sergei Polunin, who recently startled the world by announcing he was quitting from ballet, loves tattoos so much he owns his own tattoo parlour. 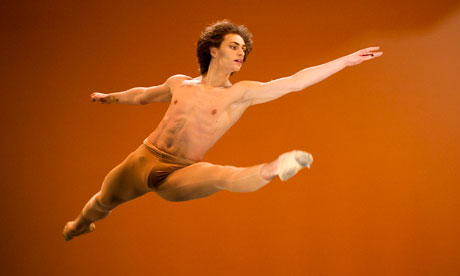 Thankfully his retirement didn't last long and he's now dancing again in a production called "Men in Motion" a celebration of male ballet, with his friend Ivan Petrov at Sadler's Wells in London.  I have cast around as widely as I can but have failed to find an image of his James Dean tattoo.  When I do it will be added to this entry.

Tattoos spell freedom to Polunin. The Guardian article yesterday (7th March 2012) reports that the subject makes his eyes light up; suddenly he sits up straight and stops fiddling with the chain around his neck. "When I was a kid I always liked scratching myself – making shapes, making drawings, and I always thought I would have a tattoo," he says.

Nothing could be more unexpected than the fact that he is part-owner of a tattoo parlour in Holloway in London, near his home, and went there to spend the night after leaving the Royal Ballet. It is his sanctuary from the regimented world of dance. The tattooists, he says, are "normal people, from the streets, it's kind of gangster. They can do anything while they're tattooing: they can drink, they can smoke, all of them are free."  His shop is the "London Tattoo Company". http://www.londontattoocompany.co.uk/

Sergei says he says he envies people with tattoos on their faces or hands: they are, he believes, "free people because they're not attached to anything – it means their job allows them to have this tattoo."  His job certainly doesn't and nor does that of almost everyone in the west and more the shame for that.  I've written elsewhere about my own love and longing for face tattoos.  For Sergei one can only imagine the strait jacket he's been in as a youngster training to be the world's best ballet dancer.  One day he will probably burst free and I wonder how much ink he will then get for himself.  Good luck to him.