Showing posts from April, 2012
Show All

The emerging plumage of a tattooed bird 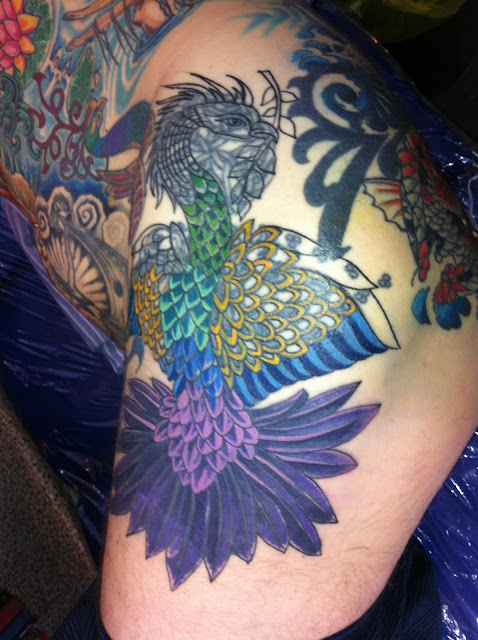 It's a slow process getting a tattoo with a lot of detail and this two hour session leaves my new bird needing at least another session to complete it.  But now it's beoming much clearer what the finished cover up is going to look like.  It seems extraordinary how the old work is vanishing. There still remains to the right the remnants of a big tribal piece that was largely covered when I had my back piece.  Now the rest must go.
Post a Comment
Read more

How I didn't get a Tibetan tattoo 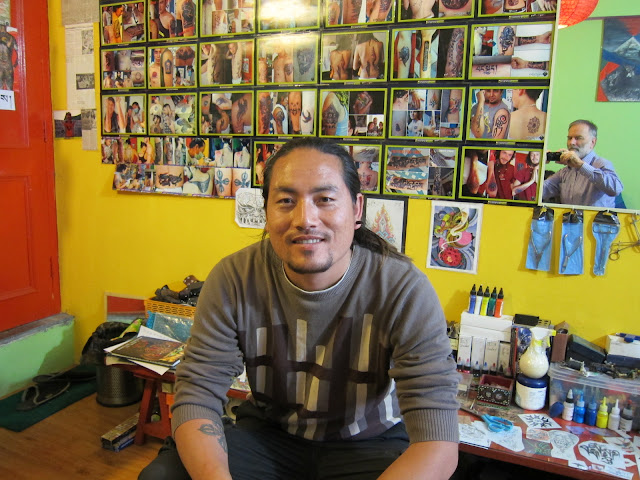 I have been back from my holiday in India and Sri Lanka little more than a week.  While in India we went to the Dharamshala valley and in particular to Mcleodganj, the small town in the foothills of the Himalayas in the state of Himachal.  From there you can see the Dhauladhar Mountains. This is the home of the exiled Dalai Lama and everywhere in the town you see Tibetan monks and many refugees.  My eyes also caught the many posters for a tattoo studio in town and I hunted it down. It wasn't as easy as I imagined it would be to find  as I followed the many signs which took me down allies, across a rubbish dump and then into what in Indian terms might be described as a suburb.  The sign here is not on the actual building of the shop but some small distance away on the wall of a restaurant. I arrived a little before six in the evening with the intent to have a look around and a chat.  I often do this at tattoo studios when I'm on holiday whether it be Cornwall, Holland
Post a Comment
Read more

Henna tattoos on a man? I got them in India 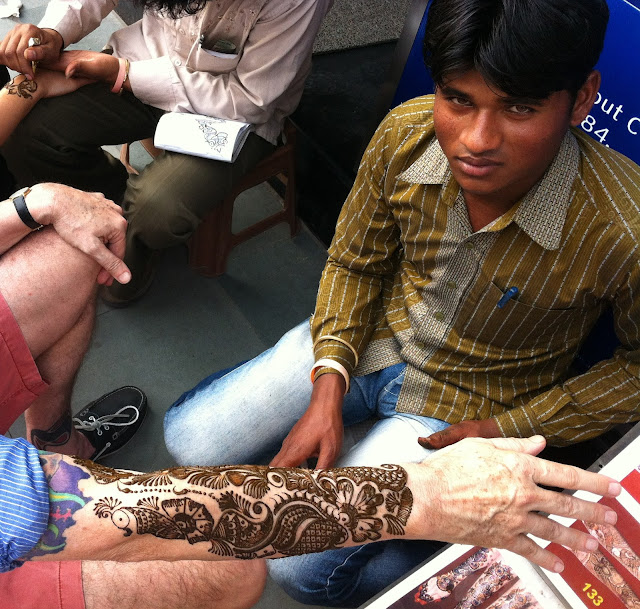 I wasted little time on my arrival in Delhi last month.  We went to a small but relatively well-off market place and there in the street was a young man applying henna tattoos.  How much?  1,400 rupees or about £17 to do my right arm.  And here it is and how beautiful it looked.  The speed and skill took my breath away.  It was there in a flash and afterwards I had the anxiety of holding my arm away from my body to avoid smudging the henna, which is in strong relief and vulnerable.  I wasn't totally succesful and the area on the bend of my arm became damaged. The major shortcoming of henna tattoos is that this beauty is like that of a butterfly.  It doesn't last long.  Quickly the henna starts to dry and become crusty.  Once that happens it starts to flake off only when I returned to the hotel I washed the dry henna off.  I don't think this was a good idea.  It didn't harm the stain in an obvious way but may have led to the tatt
Post a Comment
Read more
More posts