- July 16, 2012
David Gamble is not a tattoo artist but a tattooed artist. I met David for the first time outside the RWA (Royal West of England Academy)  in Bristol just after he had delivered his paintings to the Clifton Arts Club exhibition at the Bristol School of Art just over a week ago. http://www.cliftonartsclub.co.uk/  You can find out more about David's work at http://www.dgambleart.blogspot.co.uk/

David is unusual, not because he has the images of people he admires tattooed on his arms, but because both those images are of artists.  The first will be a name known to everyone, whether interested in art or not - Rembrandt.  But the other is Robert Lenkiewicz.  David writes "I knew him for five years and in that time he taught me a great deal about painting. He did about twelve thousand paintings in his life and I have seen a few of hundred of them and got to examine them quite closely.

I think he is the closest thing to Rembrandt of modern times and it is baffling that he is not better known. He grew up in London then moved to Cornwall and from there to the Barbican in Plymouth where he spent many years painting the people he encountered. He worked on about twenty one projects including one on vagrancy. Wherever he lived he always housed the homeless in his studios and in Plymouth managed to get quite a few warehouses where the homeless slept.

Every Christmas day he put on a feast for them in Bretonside bus station called 'The Beggars Banquet'. Many of the vagrants had drink or drug problems but Robert never drank, took drugs or smoked. He became close with one vagrant, called Edwin McKenzie, and named him Diogenese after the greek philosopher who lived in a barrel. Edwin McKenzie lived in a big concrete pipe on a rubbish dump. They had an agreement that when Diogenese died Lenkiewicz would keep the body, which he did. It made world-wide press at the time in 1984 and the police and Plymouth City Council were always trying to seize the body but never succeeded. Lenkiewicz saw the body as an artefact and it is now shown in exhibitions."

Robert Lenkiewicz had a major exhibition at the RWA a few months ago and I went to see it myself.  He is controversial and not to everyone's taste but as I walked into the main gallery I was bowled over by the impact of his body of work - "body" being the word. 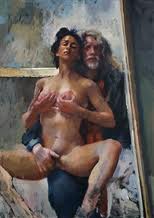 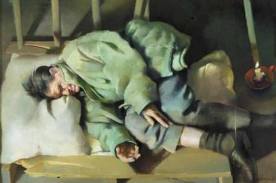 But he chose many other subjects, including the elderly and the addicts.  Almost always he painted people.  http://www.robertlenkiewicz.com/

Paul 'Myth' Naylor currently of Powerhouse Tattoo in Northwich near Manchester did the Lenkiewicz tattoo. David Corden of Ritual Art Tattoo in Rainham, Kent, did the Rembrandt tattoo.