"I will always have you" exhibition, Knowle West

- September 21, 2014
On the 11th September  Knowle West Media Centre in south Bristol launched its new 'I Will Always Have You' exhibition. The event was well attended and included live and close-up tattooing, interactive tattoo installations and a talk by Dr John Troyer from the Centre for Death and Society at the University of Bath exploring the history and cultural role of memorial tattoos. - See more at: http://kwmc.org.uk/projects/iwillalways/#sthash.quCyjxTR.dpuf
I went down there to see it for myself and rather shamelessly took of my shirt and my ink was there for all to see.  The centre had talked to many people from the local community and asked them to be photographed and be interviewed.  Some of their stories were hung in the main gallery, where the event took place. 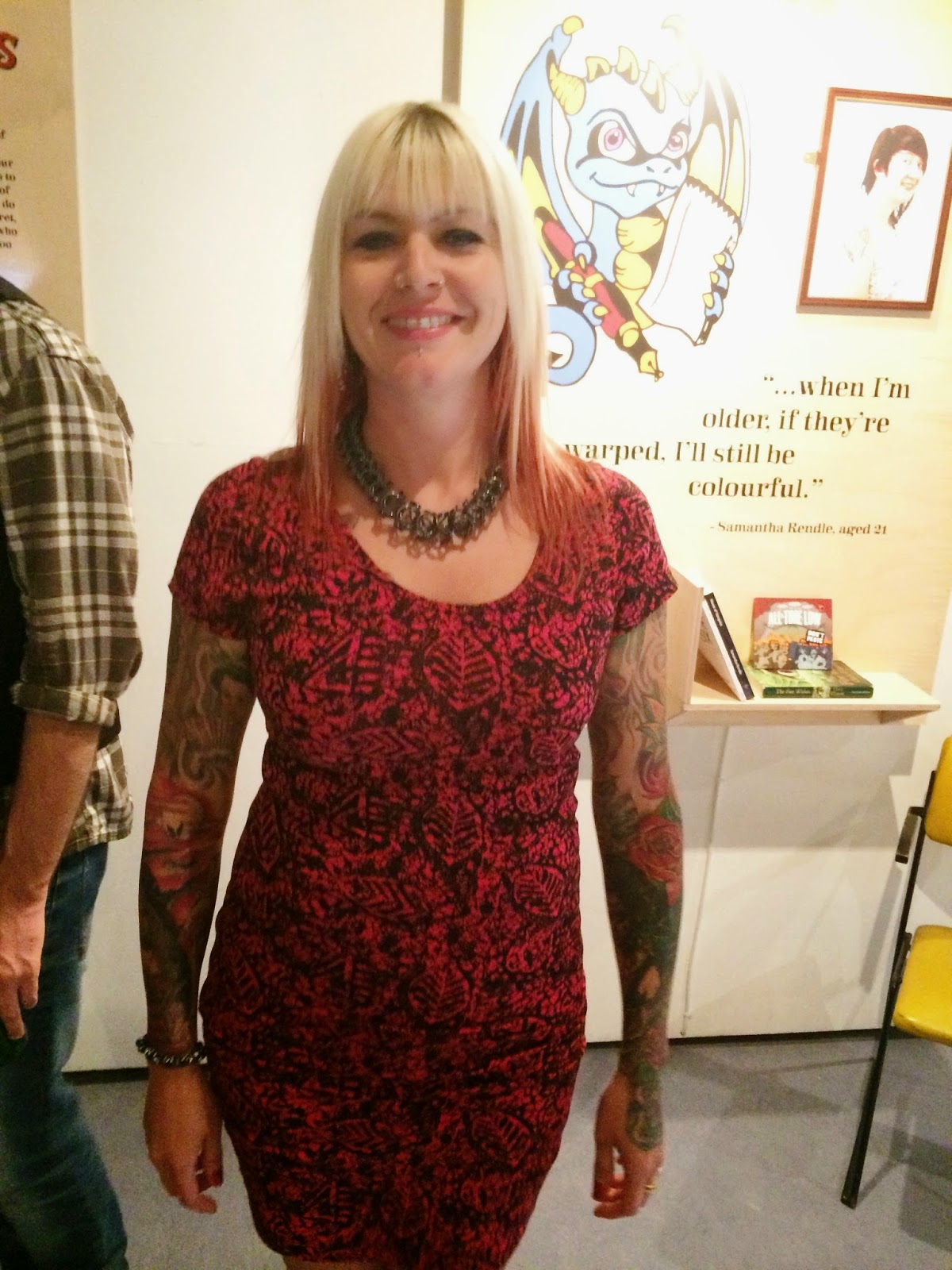 Sonia wasn't at all bothered by having visible tattoos. Getting extensive coverage all escalated from the time her then eleven year old son six years ago had a brain haemorrhage and spent months and months at Frenchay hospital.  At the time she only had two tattoos.  She then had a guardian angel tattooed on her back to protect them all. She now has a full back piece.  About a year later they had the all clear but they had to accept his personality had changed and it was then she then had the green man on her leg.  Happily her son has made excellent progress and can now even play electric guitar.
She has a witch on her sleeve and says it was nature that saved her boy and as she is a pagan so her sleeves take everything from those concepts and influences.
She has negative reactions to her visible tattoos especially in Spain, where they say she has mutilated her body.
Sonia won't get her face done but everywhere else is fine and she plans eventually to have a full body suit along with more piercings.
She is a professional body piercer and works at "Piercings 4 U" at the "Park" in Daventry Road, nearby.
http://www.piercings4u.co.uk/ 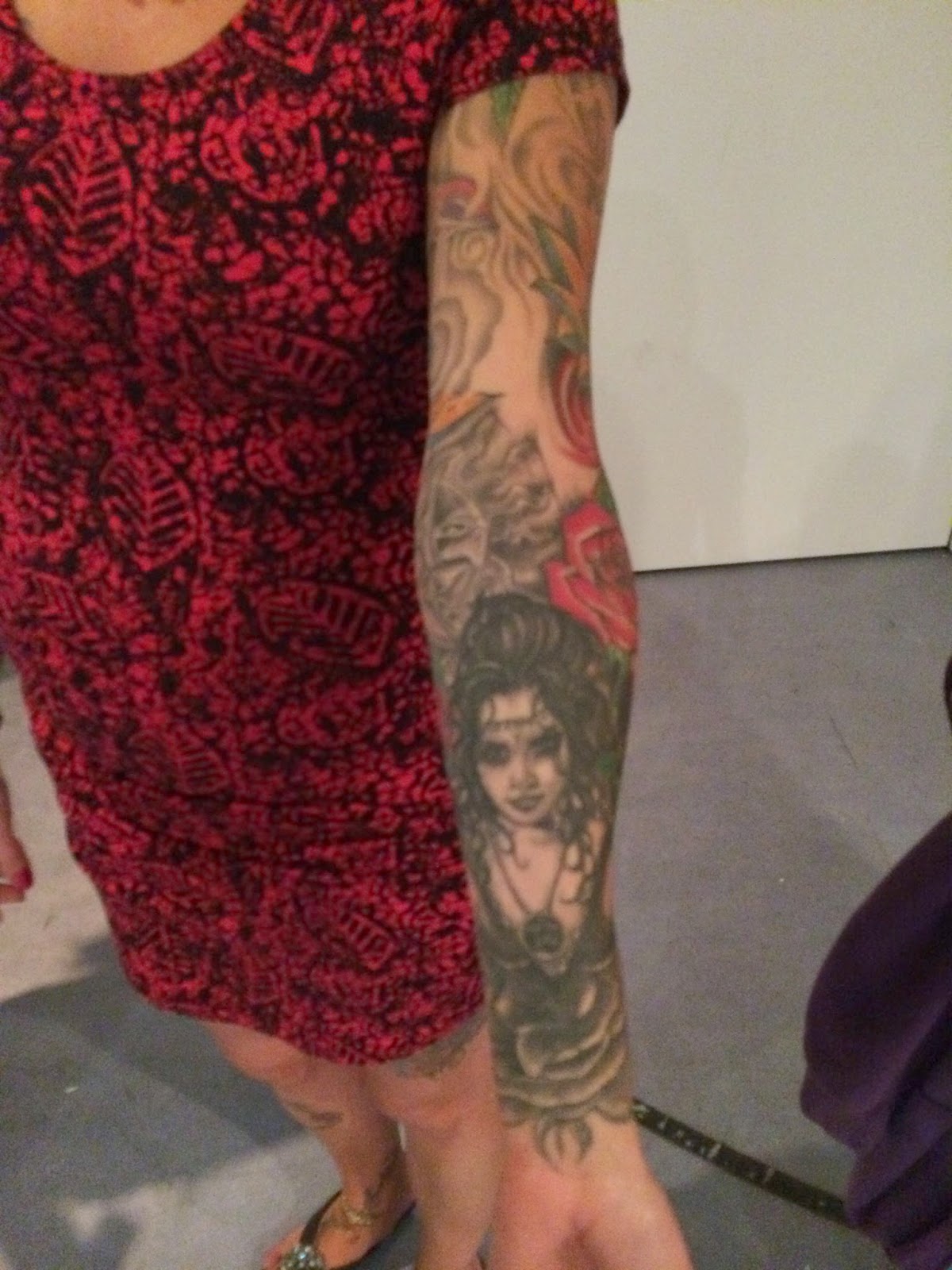 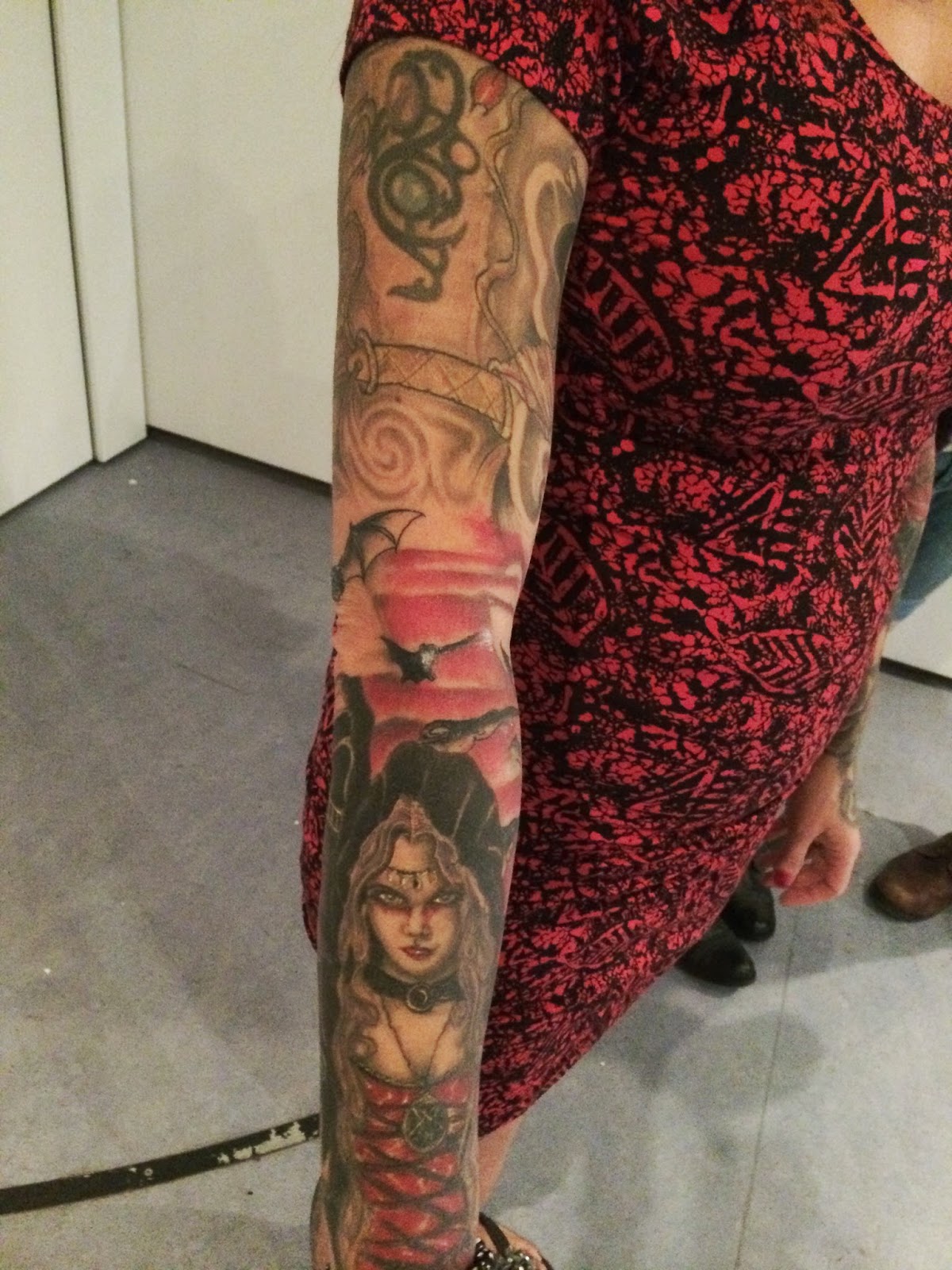 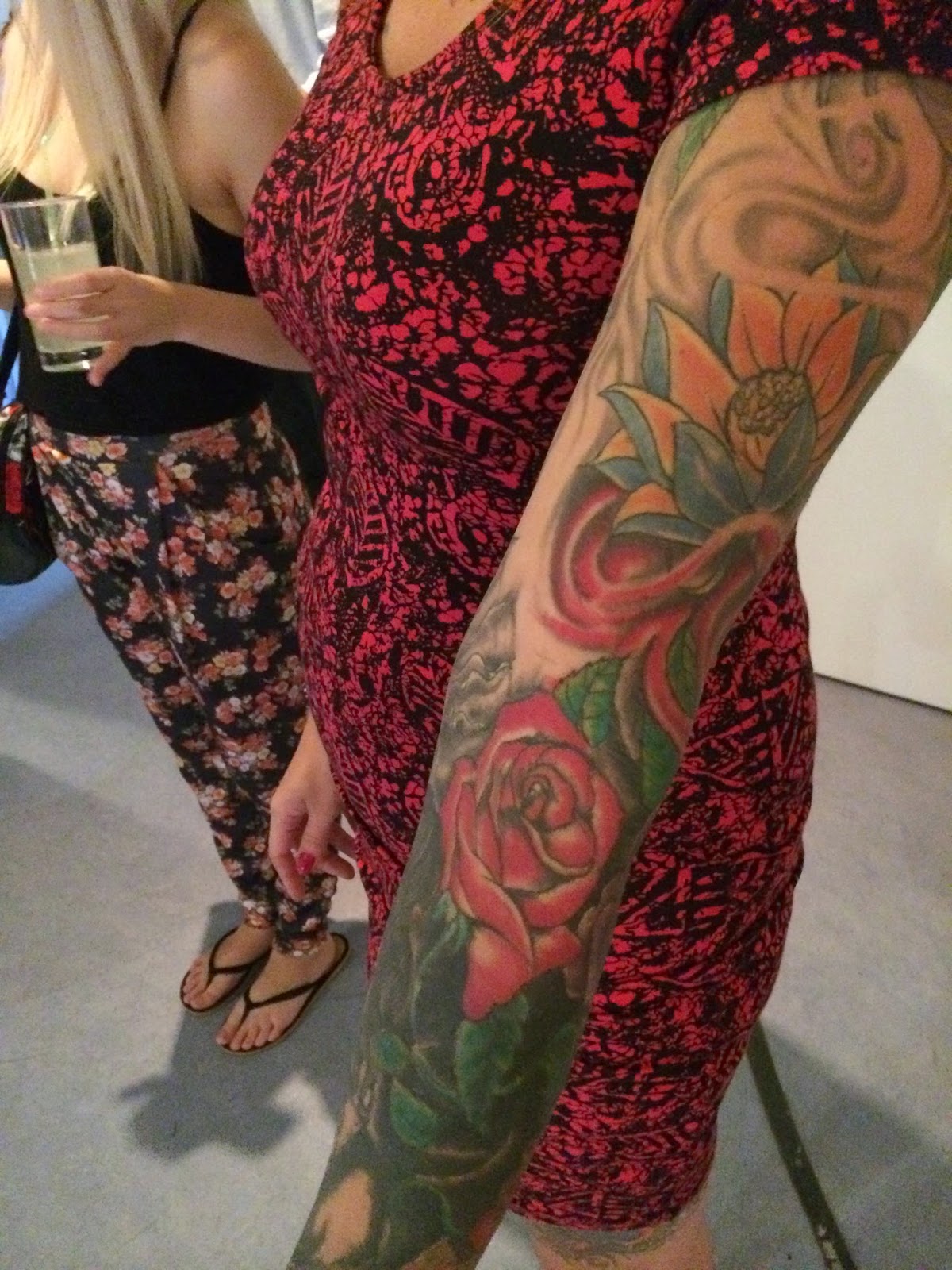 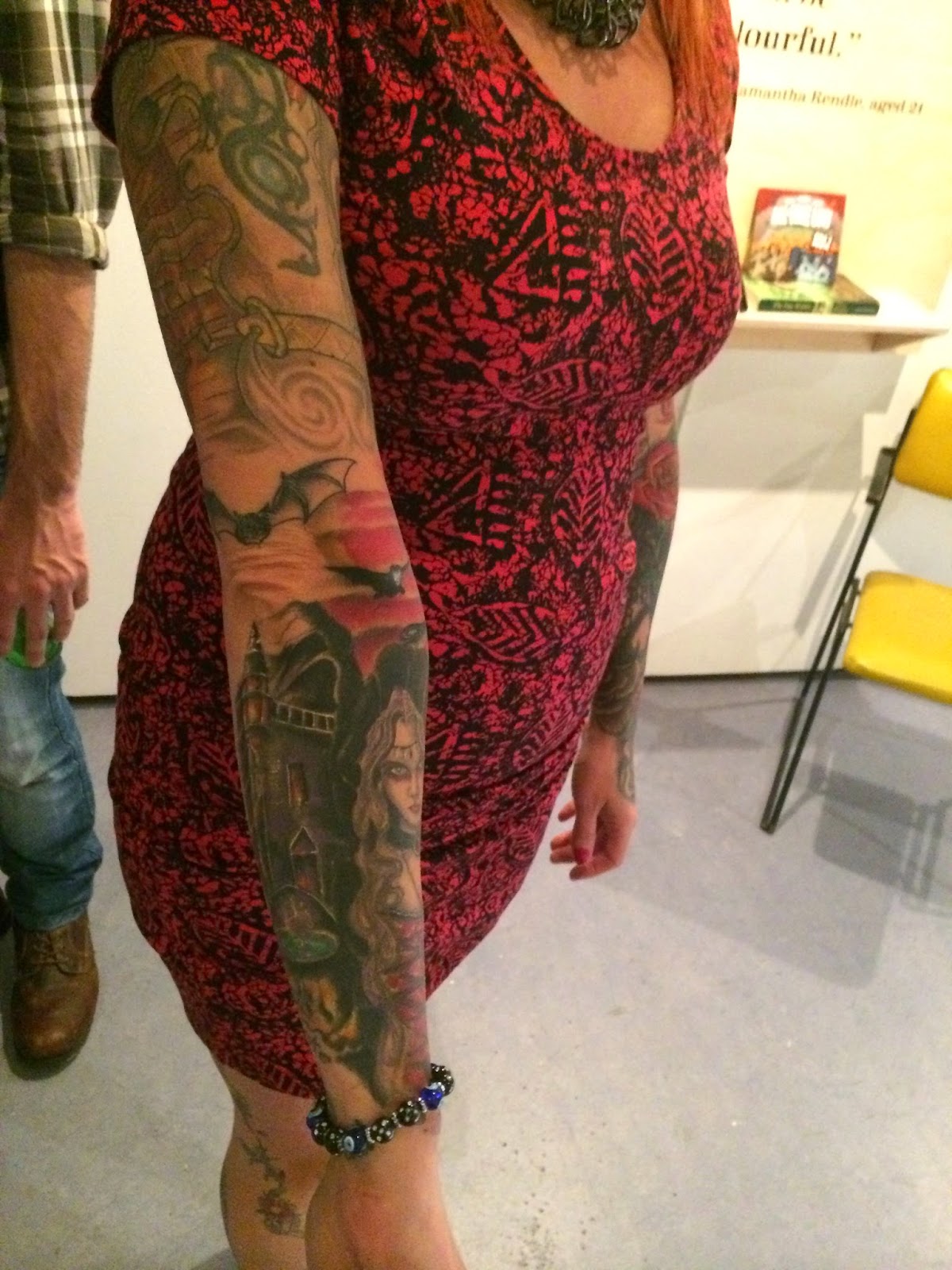 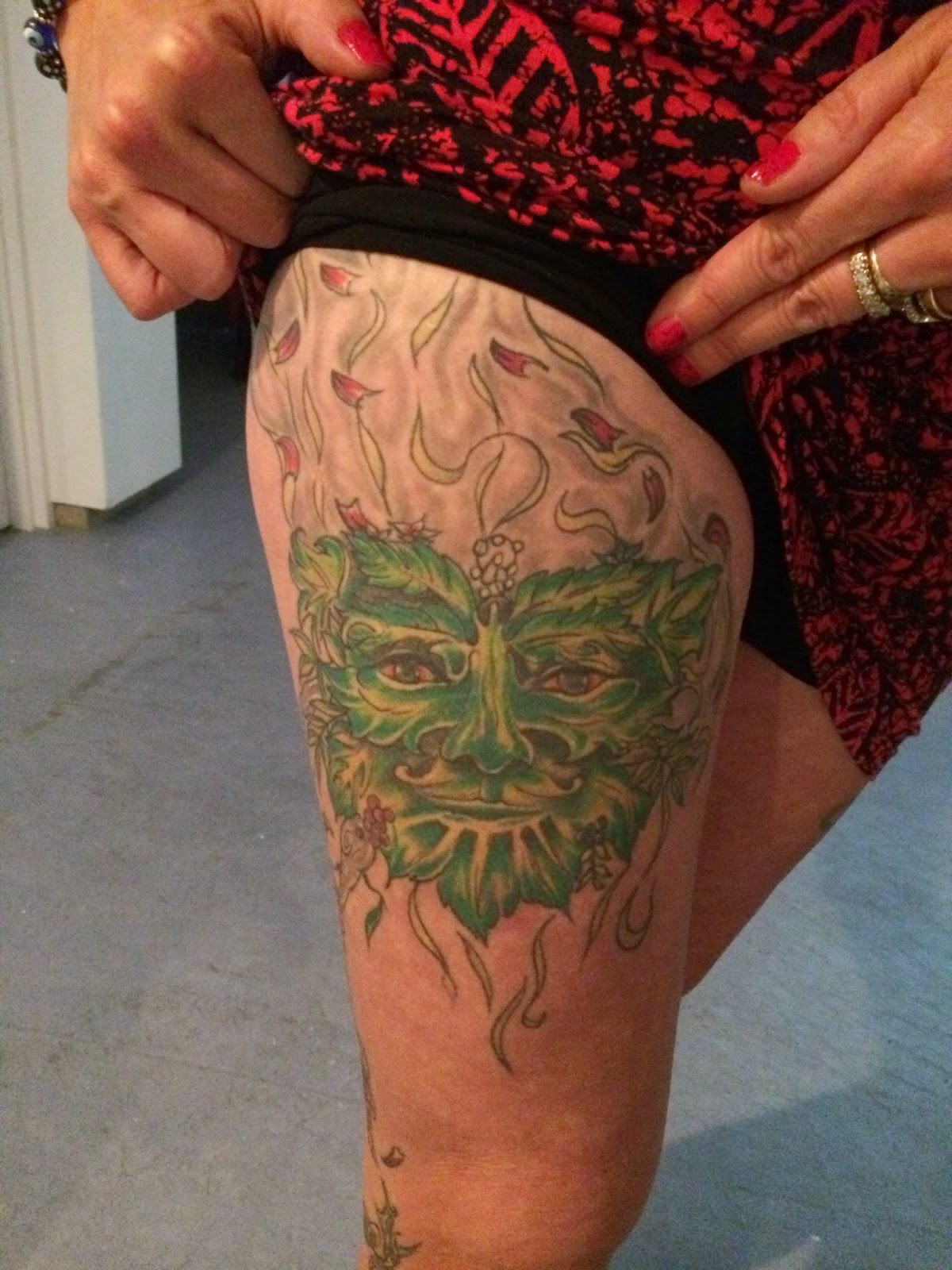 Chantelle has three young children and is fully employed looking after them but is studying neuroscience and in particular the growing of healthy brains in the first year of life. 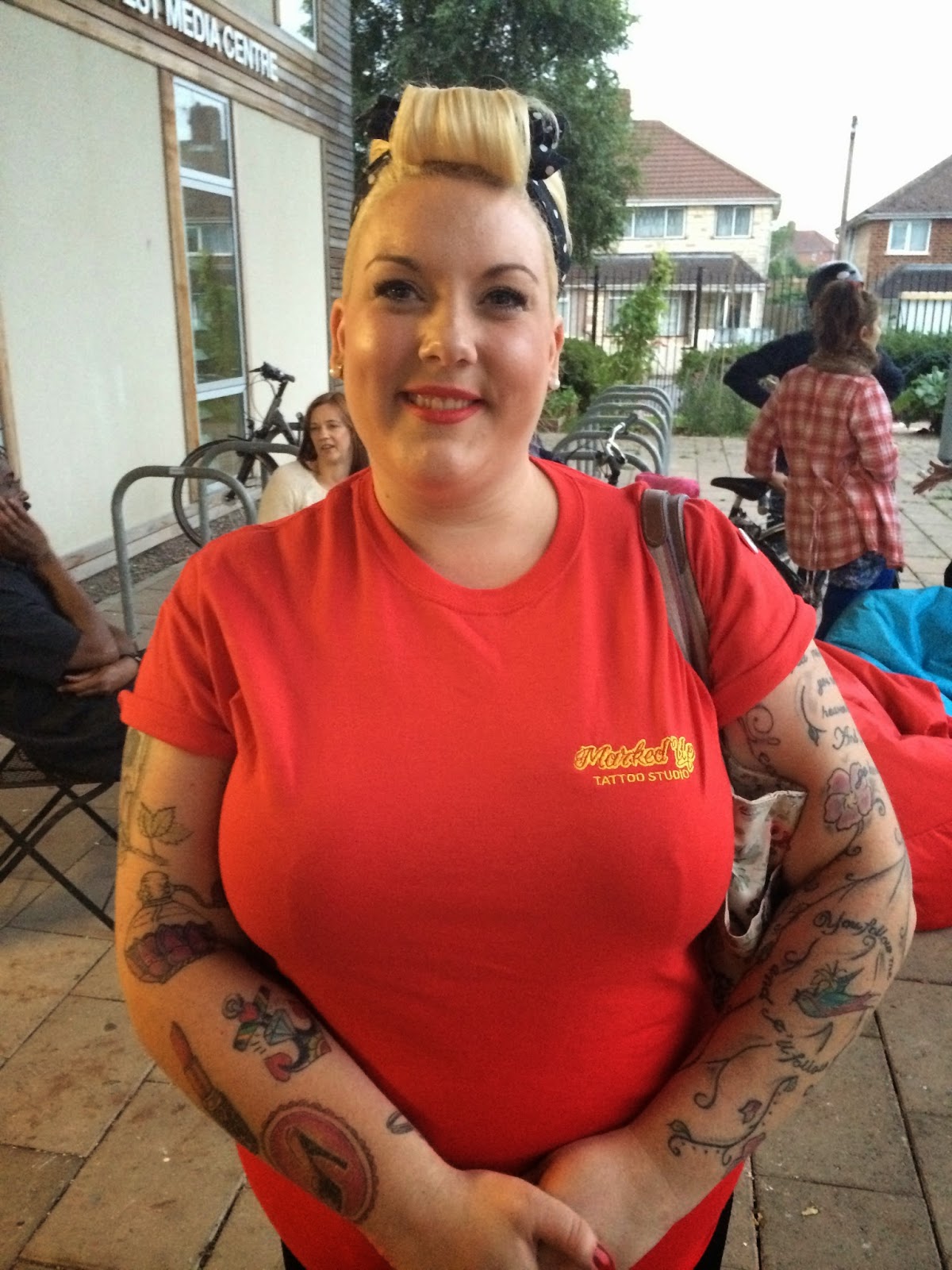 Why does she have so many tattoos and especially many visible ones included?  She decided she wanted to wear more of her emotions after she suffered depression after her life was born and she learned more about her feelings and became more brave about life.  "If that's how I am feeling then and it involves tattoos then I will get them and feel confident about myself."
She says "I don't know where my life will take me but if there are events that inspire to get a tattoo and tug at my heart strings then I will."  Most of them were acquired in the last four years.
I've gone beyond the point of no return. I like what I see in the mirror, I like the colours and what I see.  I like forties and fifties glamour.  I never go out without my red lipstick, hairstyle and tattoos!  The children love it.
Most of my family have tattoos except my Dad.  If people don't like them I don't mind, I get them for myself. 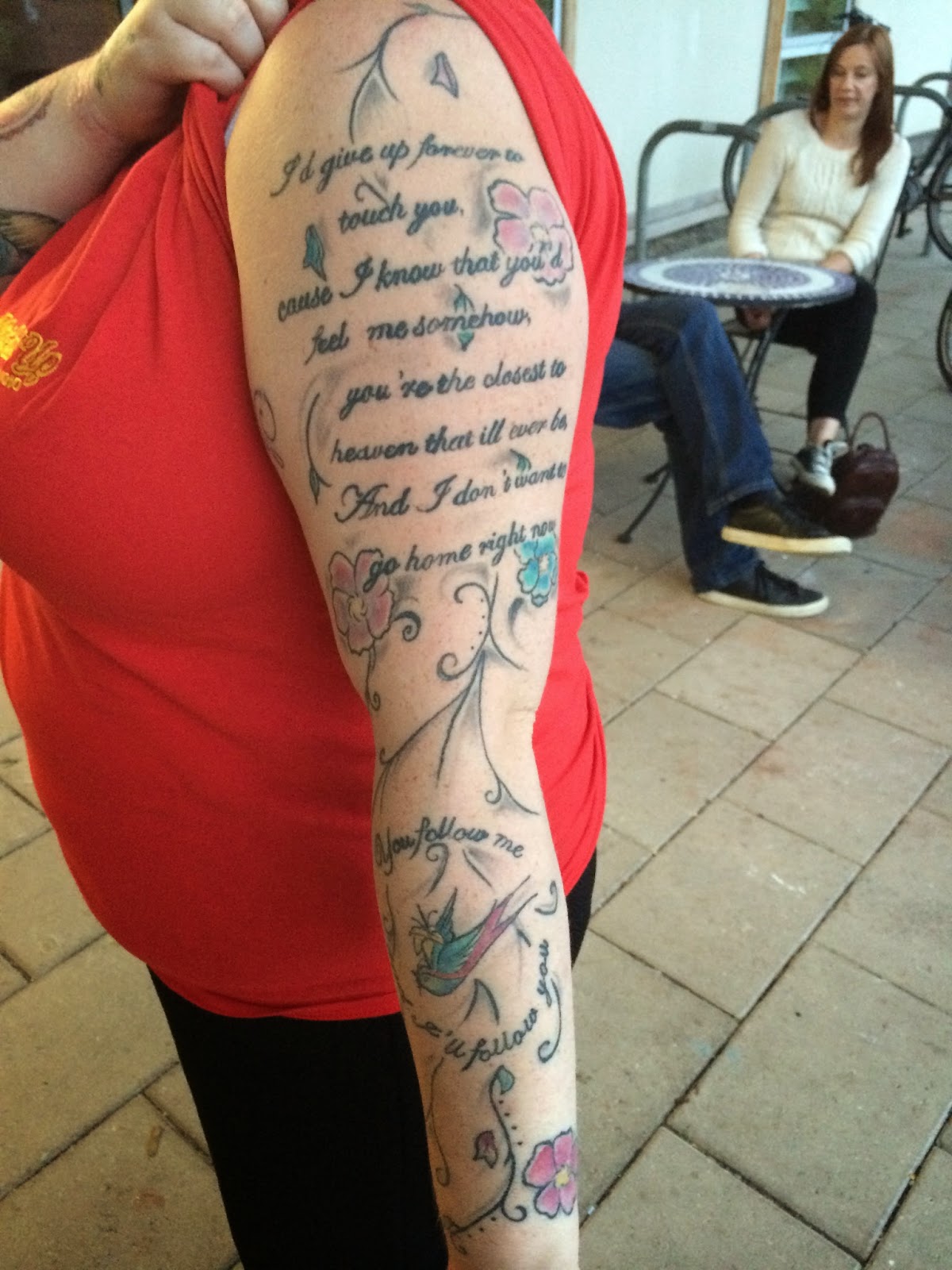 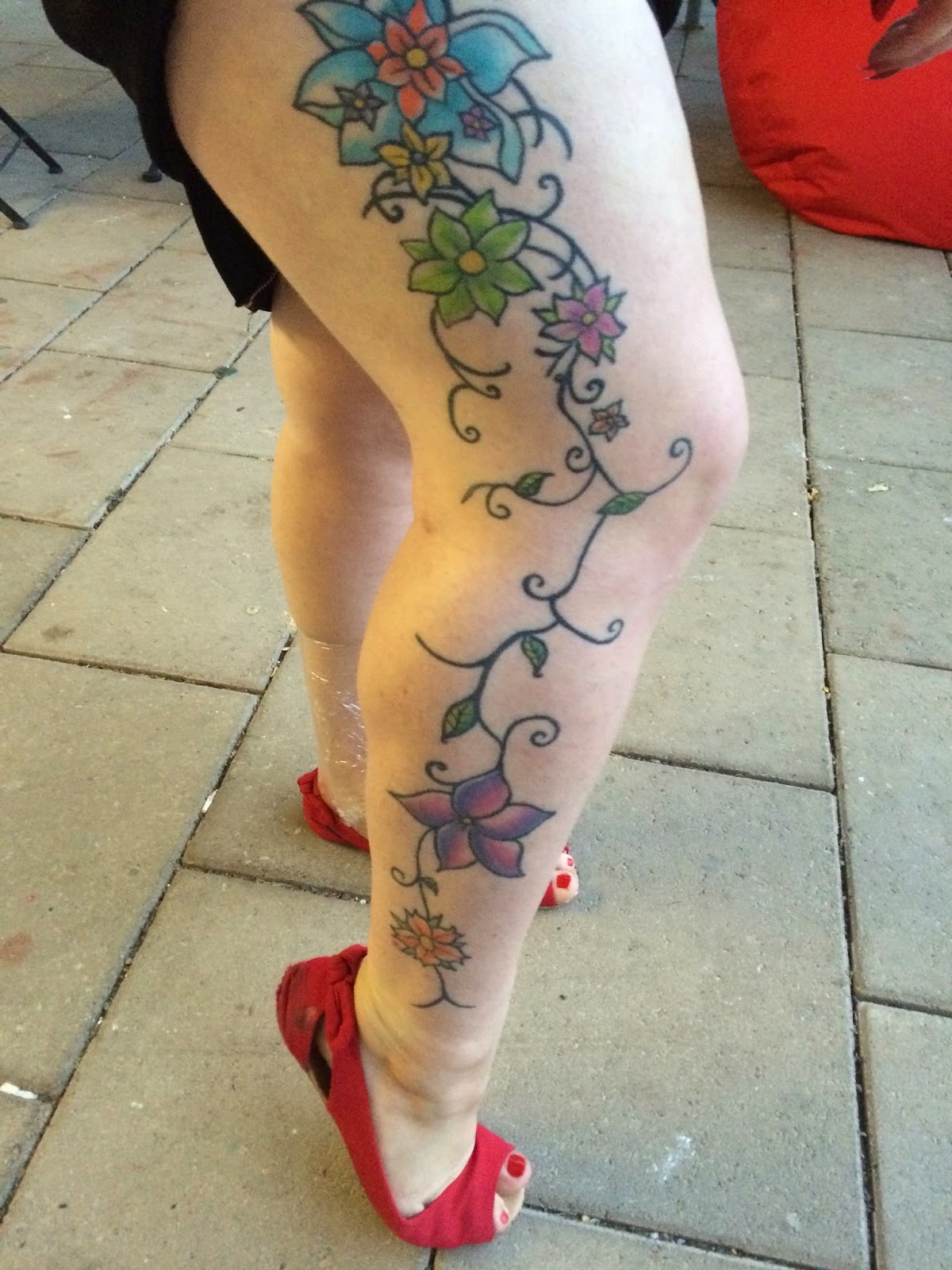 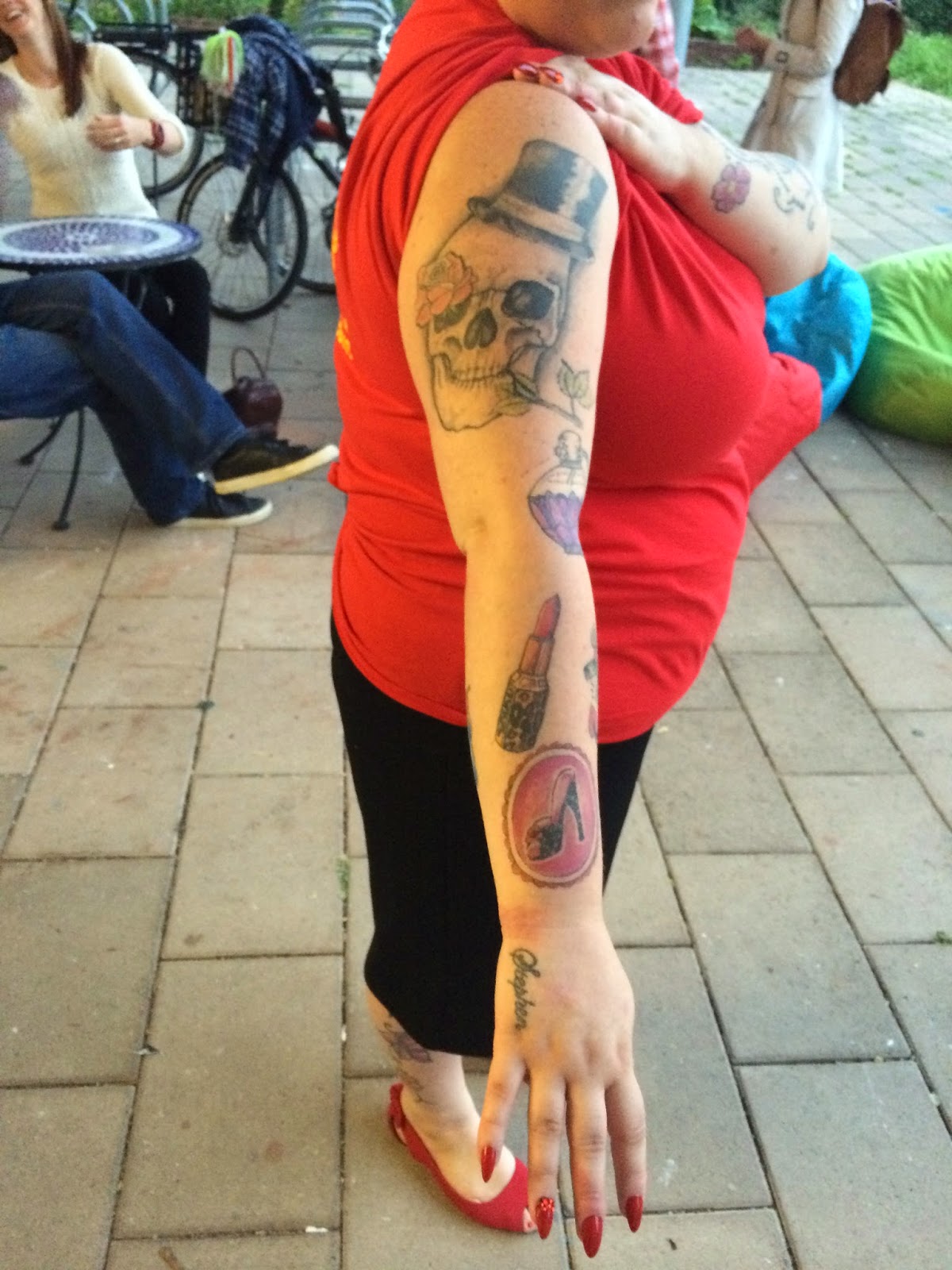