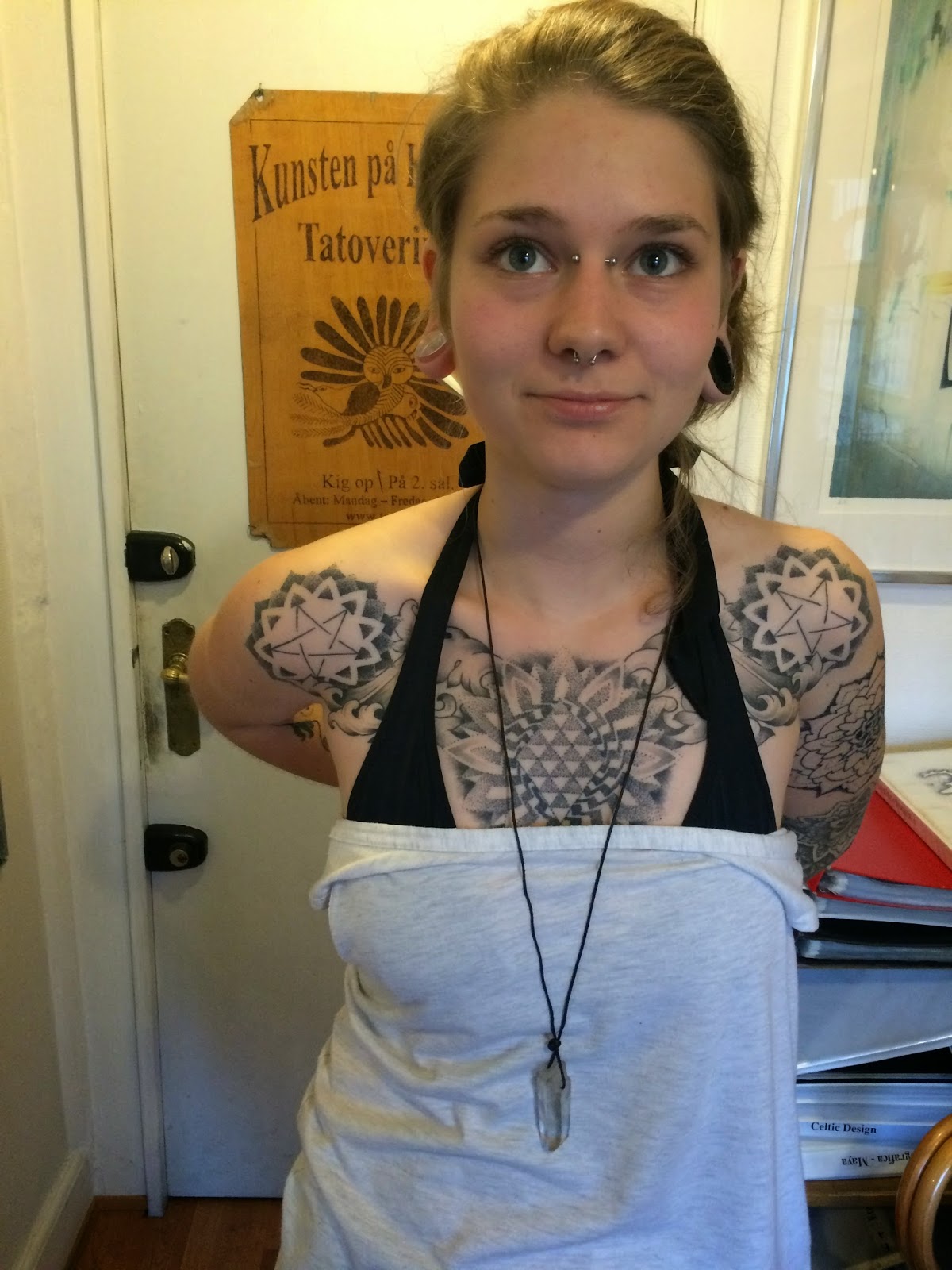 The third tattoo studio I visited in Copenhagen was Kunsten pa Kroppen and there I initially met Patricia.  This is a studio that specialises in hand tattoos and as you can see on Patricia's chest and sleeve, they are very beautiful.  She is an apprentice tattooist and has acquired the skills in pointillism.  Examples of her work can be seen on the website www.tattoo.dk 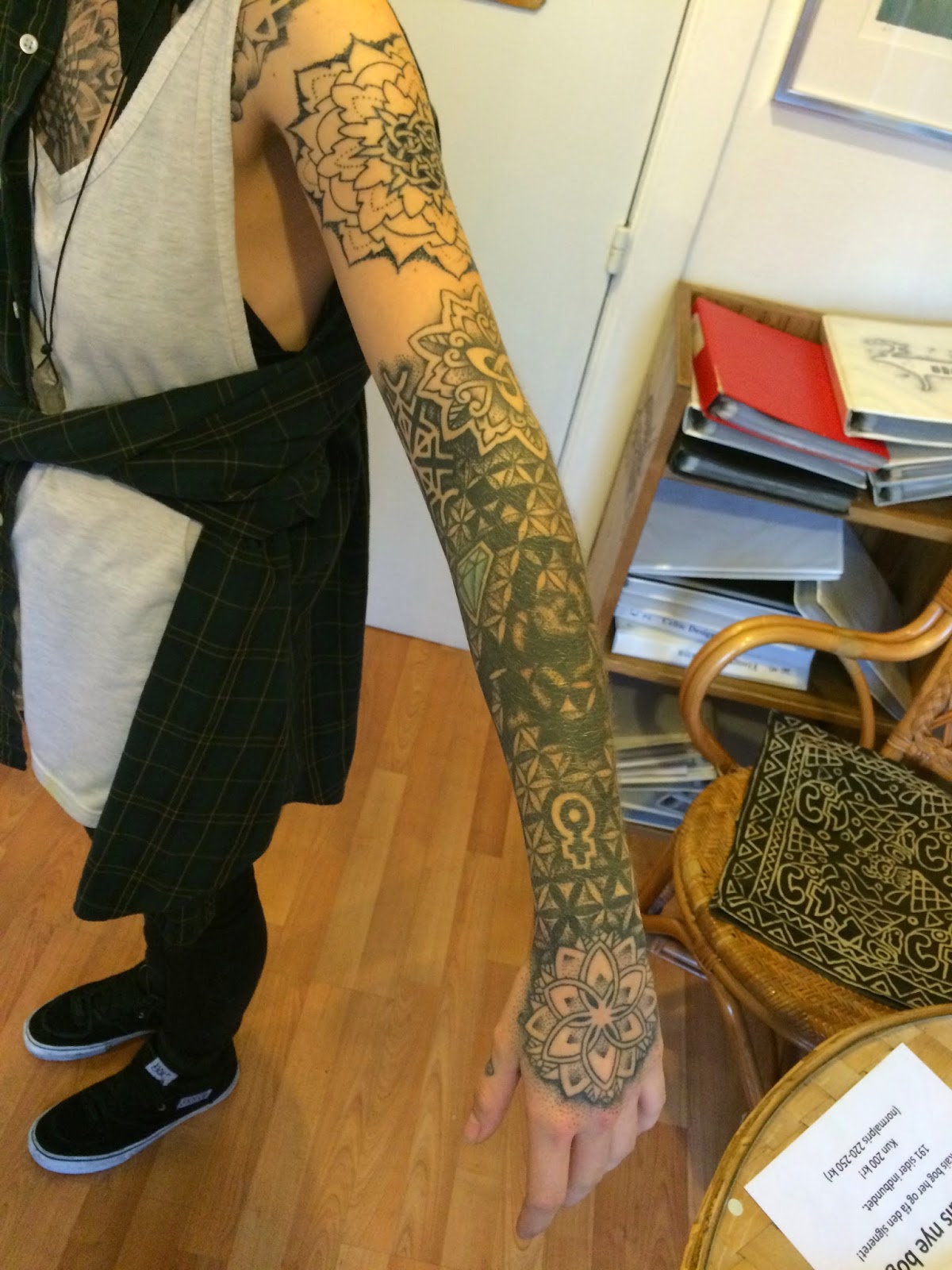 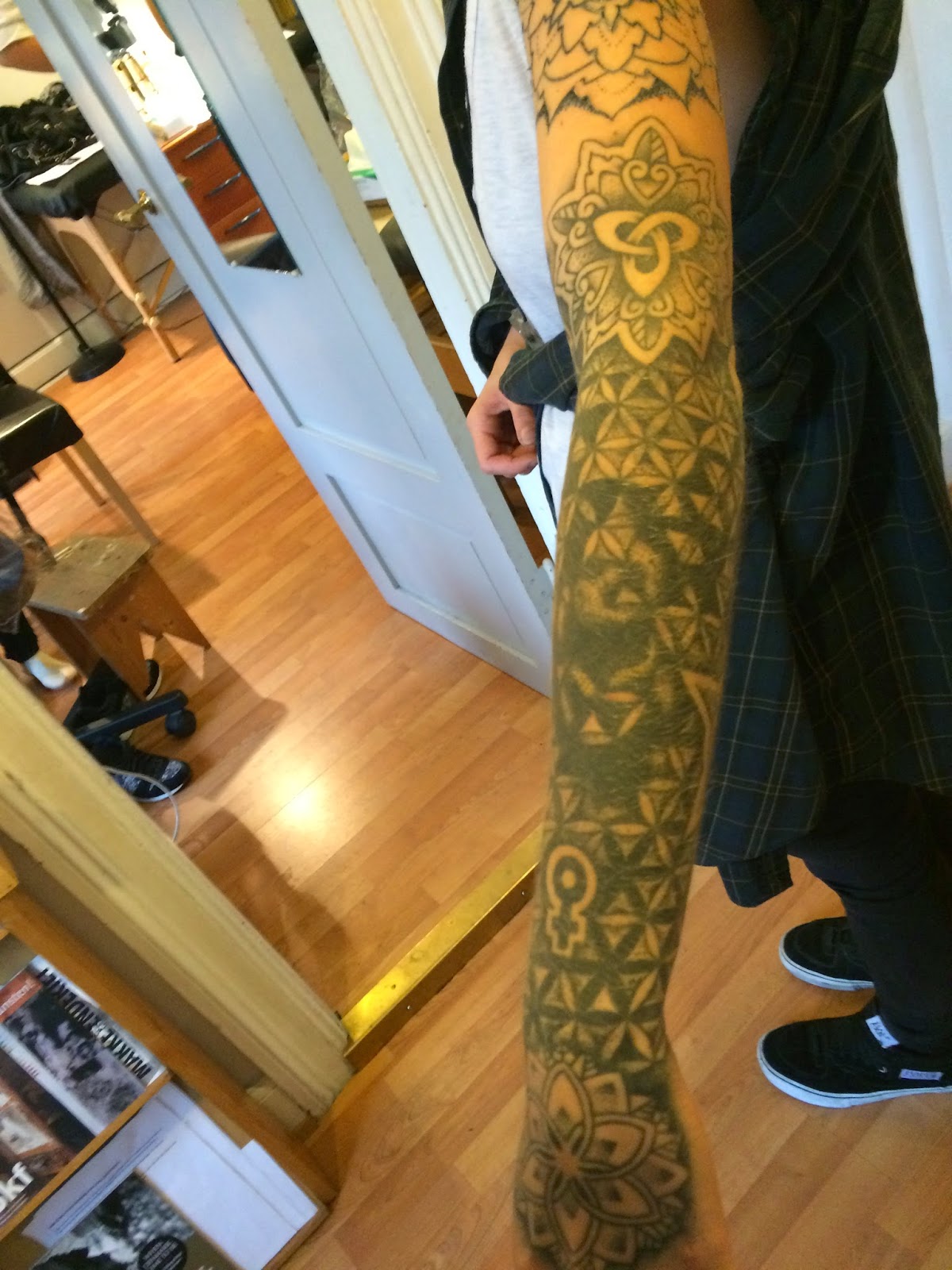 Patricia is from Copenhagen and started working a year ago at the studio and now she is only 21.  Her first tattoo was when she was sixteen and her first professional tattoo as she describes it was when she was eighteen.  Already she has plenty of ink and she will continue until she has a full body suit - no messing, no doubt in her mind.

After her arm is finished she will have work on her legs.  Fellow tattooist at the studio, Kai, did her sleeve though her other colleague, Marcus, did the other work.  She worked collaboratively with them on design.  She used to have more piercings than she has now but had some problems with a few of them so took them out.  She will not extend her ears any further..

My mind is focussed on just one kind of extreme body modification - heavy tattooing.  My body appearance has changed drastically in the past five years.

But what are other people's body modifications of choice?  One is  a practice known as "tight lacing", in which the users of corsets embark on reducing their waist sizes to as small at 17 or 18 inches, if they can.

It's not something that grabs me but Lacie here (www.staylace.com) has dedicated herself to the practice.  There are others like her who take it very seriously.  It's a fetish and not necessarily permanent.  If you give up regularly wearing this special kind of corset then you will eventually revert to normal.

I have no plans to embark on this myself, but before I pass any judgement must reflect that what I am doing to myself is even more extreme.  The images here are truly eye catching.  I have never knowingly met anyone who is into tight lacing yet there is a big community out there who do it.

The work in my groin and pubic area has been completed.  Years ago Louis Molloy did the central figure in this picture but avoided going all the way.  Now Ben has tattooed a circle of clouds all around the image that goes as far as it can without inking my genitalia.  This completes the work on my torso.

Added to that Ben has worked some hair detail on a much older art nouveau image originally tattooed in the nineties.  Months ago Ben covered the black hair with brown.  Today he gave the hair some texture.

To mark the end of this phase Ben took some pictures of my whole body.

I went to the Newport, South Wales convention yesterday.  Before getting there, I spent two and half hours with a face painter who gave me fake face and neck tattoos.  It was painstaking but very pleasant and enjoyable.  Sam Fisher, the face painter from Longwell in Bristol,  did a wonderful job and the reaction I got at Newport was quite electric.   All tattooists spotted the fakery immediately and most heavily tattooed people didn't take long either.  But many were unsure.  One way or another I caught the eye and it led to many conversations with those attending the convention.
It was an opportunity to talk about face tattoos and how far people were willing to go.  I was struck that a significant proportion of those there with some face tattoos were women.  I'm not sure, but maybe more than half.  One young woman I photographed, but unfortunately can't name check, has at her tender age advanced very far on neck and face.


She said she may well take it further. But others…
Read more