Showing posts from February, 2015
Show All

Jacqui Moore, a very tattooed woman and her partner Curly On the 28th July 2011 I wrote about Jacqui Moore from Oxford, following a big article about her in the Daily Mail.  Since then she has had even more ink, completing her legs and I think adding some to her face.  Her partner, Curly is a well known tattoo artist in Oxford.  Here is a rather striking photo of them somewhat in the style of Norman Rockwell, the famous American artist http://en.wikipedia.org/wiki/Norman_Rockwell .  Truly a 21st century image of a couple.  The photos are by Mark Leaver, http://www.mdleaver.com/  except the image of Jacqui being tattooed on her face, which belongs to an earlier period..   Ever since I wrote about Jacqui my curiosity has been unsated.  Finally after visiting Curly's tattoo website http://www.tattoocurly.com/home.htm  a few days ago I saw some new photos of Jacqui, where the work on her legs is now complete.  I decided to phone them.   Curly was the first I got hold of.  Firstly I had to ask for confirmation that
Post a Comment
Read more

My tattoos as video pop art - Oritse Williams of JLS. 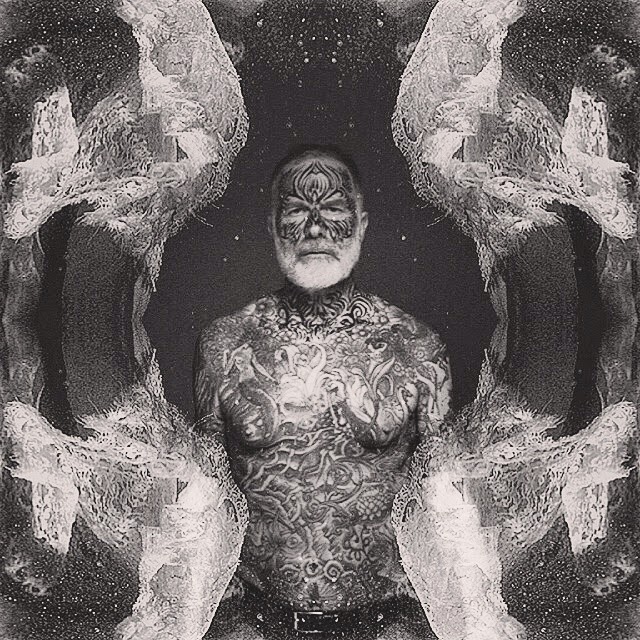 Over a year ago I was an extra in a pop video I thought was for JLS.  In the end it seems to have been used for just one member of that band, Oritse Williams http://en.wikipedia.org/wiki/Orits%C3%A9_Williams . He is not signed to any label, yet his video has been viewed by over sixty thousand people so far.  You can take a look at it. http://youtu.be/mq5wnKVdXeQ The director of the video is Drew Cox of Slanted Eyes.  He has created the image here by  transposing a woman diving into water onto my image.  I think it is eye catching and rather flattering to me.  Every time I look at his photo of me I wish the work on my neck and face were permanent like everything else I have tattooed on my body. I hope this year he will make a film of my tattoo art.  It will be quite something if it gets made.
Post a Comment
Read more
More posts