Jacqui Moore, a very tattooed woman and her partner Curly 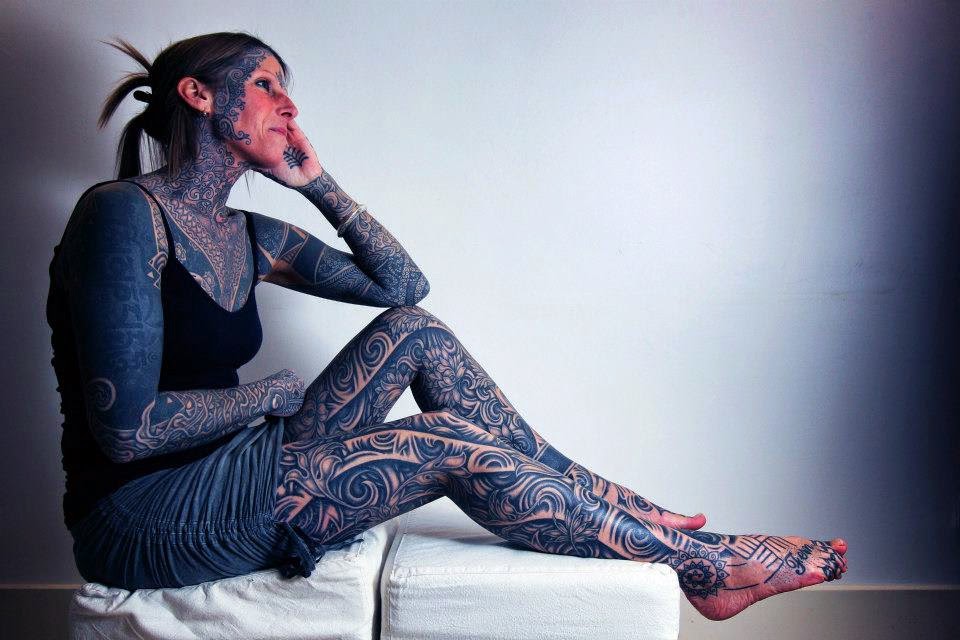 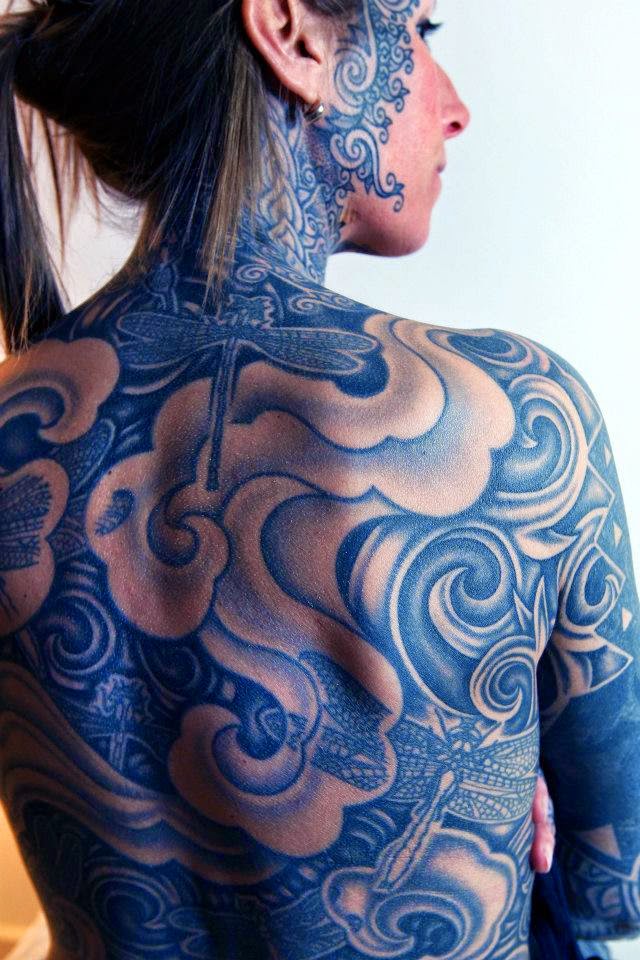 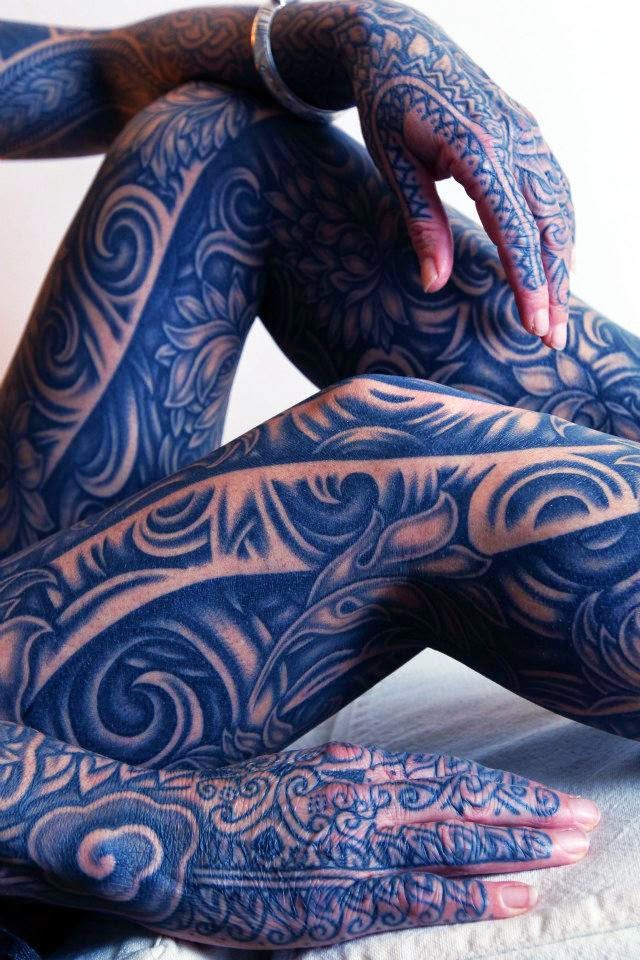 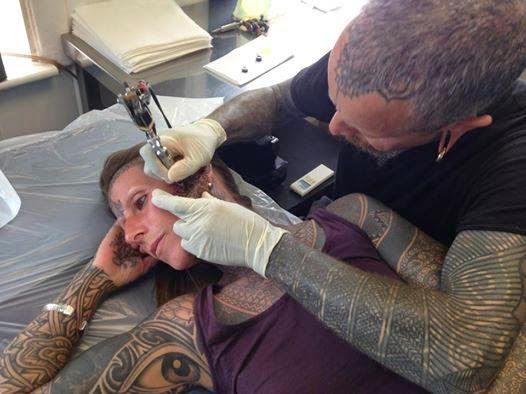 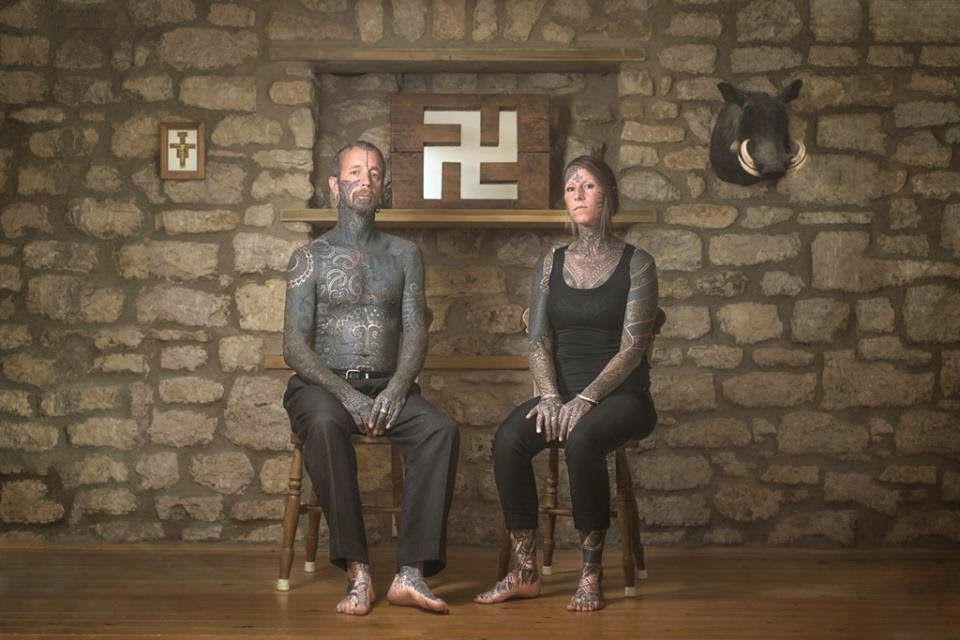 On the 28th July 2011 I wrote about Jacqui Moore from Oxford, following a big article about her in the Daily Mail.  Since then she has had even more ink, completing her legs and I think adding some to her face.  Her partner, Curly is a well known tattoo artist in Oxford.  Here is a rather striking photo of them somewhat in the style of Norman Rockwell, the famous American artist http://en.wikipedia.org/wiki/Norman_Rockwell.  Truly a 21st century image of a couple.  The photos are by Mark Leaver, http://www.mdleaver.com/ except the image of Jacqui being tattooed on her face, which belongs to an earlier period..
Ever since I wrote about Jacqui my curiosity has been unsated.  Finally after visiting Curly's tattoo website http://www.tattoocurly.com/home.htm a few days ago I saw some new photos of Jacqui, where the work on her legs is now complete.  I decided to phone them.
Curly was the first I got hold of.  Firstly I had to ask for confirmation that my reaction to the Daily Mail story that she covered 85% of her body as a revenge on her ex-husband was a nonsense.  This was quickly confirmed.  The enormous publicity given to this storyline was upsetting to Jacqui and her children.  It seems Jacqui had commented that she went to Curly's studio after the break up of her marriage and may have said she got some work to celebrate her freedom.  But nothing more.  No one gets a body suit out of revenge.  It takes a serious long term commitment.  It's something you do for yourself.  Curly said that Jacqui possibly now had all the ink she would ever have.  She didn't want to shave her hair off permanently so there was no point in tattooing her scalp if the work would never be seen.
Later the same day I got hold of Jacqui after she had finished work.  She is employed at an upmarket florist in Oxford.  She says having visible tattoos has proved little of a problem to her.  In the early days was hard to deal with some people making loud comments about her tattoos in public.  But now she's used to it and it doesn't bother her.  When she meets people their first reaction may be surprise but that very quickly disappears and they accept her for who she is as a whole person.
There was a never a moment when she said to herself that she wanted a full tattoo bodysuit.  Once she started being tattooed by Curly one tattoo just led to another.  She had already got some tattoos during her first marriage.  She had long wanted tattoos.  It was not Curly's idea.  Being with Curly enabled her to become extensively tattooed and on and on they went.  Jacqui came up with ideas and Curly completed and then inked the results.  Curly thinks his work on her legs is the best he had given her and with hindsight wished they had done that style all over.  Curly says everyone who has a lot of ink would have done things differently had they had the experience they later gather, when fully covered.
Is that it then?  Curly said yes, but Jacqui said no.  She wants some over-tattooing on her arms and is toying with the idea of tattooing her chin.  They have even tried some ideas out.  But then she backs off the idea.  She is not yet sure because it's a big step.
I asked if she is someone who is sure about who she is and mostly untroubled by what others think she should do and she said she thought that was true.  Both Curly and Jacqui are articulate, calm and quietly assertive.  I loved talking to them and hope to meet them both when they come to the Bristol tattoo convention in June.  http://www.bristoltattooconvention.com/home.html