TV and newspaper story about my tattooed self 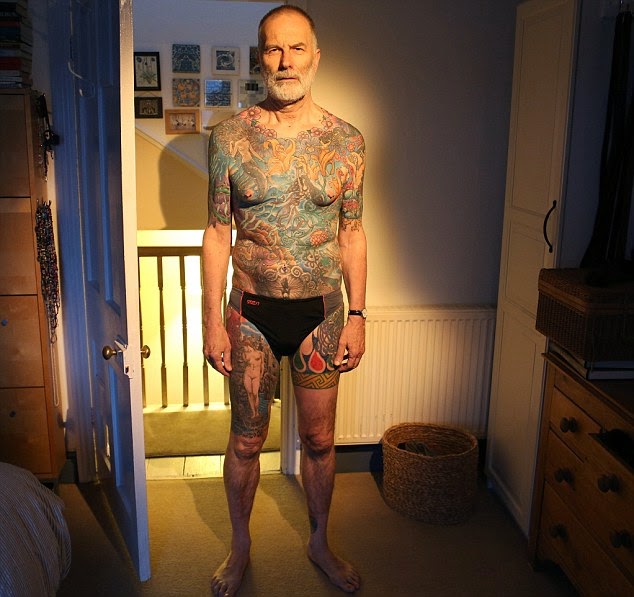 Recently an offshoot of Channel 5, Spike TV, filmed me as a part of their new series on tattoos.  They told me they hadn't fixed a name for the series but it would be something like Tattoo UK.

Weeks later a producer phoned me to let me know when the piece was to be aired.  I asked what the series was called and was told "Tattoo Disasters". http://www.channel5.com/shows/tattoo-disasters-uk/episodes/episode-5-572  The section about me starts 12 minutes in. To say the least I was annoyed about this.  (Thanks for including me in a programme under a title like that.)  I was wilfully misled by the programme makers.  I contacted Curly Moore who had been in an earlier programme in the series and he felt just the same.

I have to take the blame for being stupid enough to agree to participate.  As a retired broadcast journalist myself I could easily have guessed that I was entering an ethics free zone.

Then yesterday someone I know contacted me to say they liked the article with my tattoos.  I replied asking what article?  She said I was in the Daily Mail and sure enough I was.  Here is the link.
http://www.dailymail.co.uk/femail/article-3087467/Retired-accountant-70-reveals-hid-tattoos-fear-judged-work-covered-body-colourful-art-no-plans-stop.html

No one had sought my permission to publish this.  I can only presume there is some connection between Spike and the Daily Mail.  I would never willingly have agreed to be in that newspaper.  The article itself is straightforward enough.  I checked out the TV programme and the stuff about me was accurate, though most interesting stuff had been edited out.  No surprise there.  The series itself is mostly about people who have work done on them by "scratchers" and are getting their ink covered.  How tedious.  Oddly, the Spike producer had phoned me mostly to ask me not to agree to any request from the press to run an article on me.  I readily agreed as I was mostly interested in damage limitation.

Now articles about my tattooed self have popped up elsewhere including the Bristol Post http://www.bristolpost.co.uk/Clifton-grandad-reveals-amazing-tattoos-kept/story-26539234-detail/story.html and the Daily Star http://www.dailystar.co.uk/real-life/443251/Extreme-tattoo-London-pensioner-whole-body-inking-art

I thoroughly enjoyed working with the journalists and cameraman.  It was great fun and they were good people.  But I always suspected their producers would be unscrupulous.  More fool me.