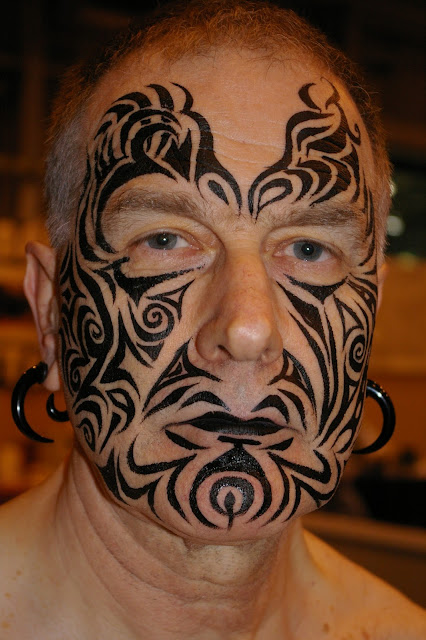 My fixation with face tattoos is obvious to anyone following my blog.  So while my wife is away in India later in November 2015, I plan to head off to London to get my face, head and neck covered in temporary tattoos, only this time I plan to keep them for several days.

It wasn't altogether as straightforward as I imagined to arrange.  First I planned going to Brighton where I know there is a strong alternative community.  One body painter I contacted suggested I speak to Naomi Gay, who would be most comfortable doing what I want.

After all, it is a bit outside the norm.  Alas Naomi was heading abroad for several months the day before I planned to arrive in Brighton.  But she wanted to put me in touch with a couple of other body painters she respects.  The problem was they were around London.

The first contact was Natalie Sharp.  www.nataliesharp.co.uk And once I spoke to her I thought she could be just the person.  But she lives in Hackney.  After thinking about it I decided to alter all my plans and hang out in Hackney for a few days.  This I have arranged through AirBnB and on 19th November off I will go, with head shaved, body waxed and beard mostly removed.  Very inconveniently I will have my two dogs with me.  Maybe they will act as some kind of immunity for me, but the hunt for dog friendly cafes etc. in Hackney and Bethnal Green should be fun - NOT.

But a couple of days ago another body painter contacted me.  She is Juliet Eve.  She attached to her email three photos of temporary tattoo work she had previously done using Colorini, which lasts a few days.  She wrote: I actually have painted a man’s face with a Maori design!  I went to a Tattoo convention where my partner and I were trading Glitter Tattoos and he was really keen to have a face Tattoo, but just couldn’t bring himself to do it as he worked as an Accountant. J

I wrote back saying sorry but I have already fixed things up with someone else, but the man you write about is me!  So here above is the photo she took.  She did this freehand with astonishing speed and skill.  It was at Tattoo Freeze 14th January 2010 in Telford.  Juliet lives in Hemel Hempstead.  www.julieteve.co.uk/ and www.facadeacademy.co.uk plus www.thebodypainters.com

As recollect it I had this work done late in the afternoon during the convention - about 5:00 pm.  I loved it so much that I travelled all the way back to Bristol by train looking like this.  A little Dutch courage helped me though no one gave me any trouble.  On arriving home I removed it to avoid spooking my wife.  Now I know how to find her, I feel sure I will get her to work on me sometime in the future.

But I made the decision there and then to get my face and neck painted whenever going to tattoo conventions, if I could and I have followed that through.  I even had it done for a pop video I participated in a couple of years ago. Now my plans take me one step further, keeping the tattoos as long as they last.  I will keep a detailed record of my experiences which once I am back home will record here.