Back for my English Breakfast at the Italian cafe (Pellicci's) around the corner.  We exchanged several photos, with the boss getting one of his staff to photograph me and him together.

Then off with my dogs back to Broadway Market . 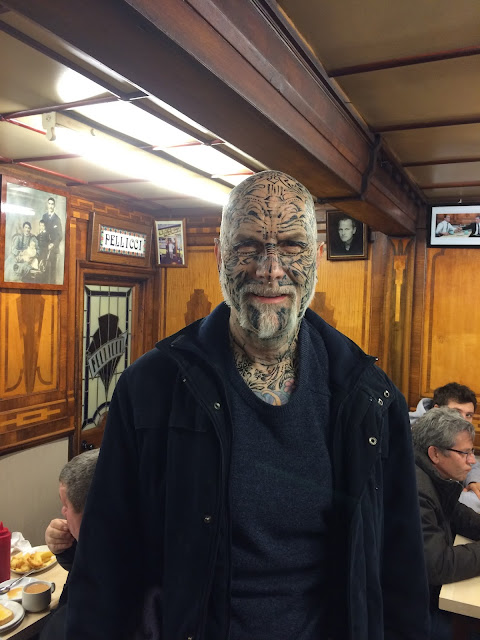 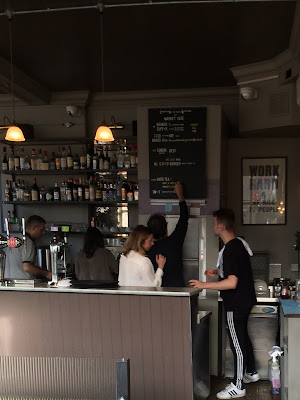 There I caught up with the owners of a lovely cafe again.  It has the not too imaginative name of Market Cafe.  http://www.market-cafe.co.uk/

You can see the Frenchwoman in white at the bar. They were lovely to me.

Afterwards I walked along the canal until I arrived at Victoria Park and then just sat down there for a while.  A very peaceful morning enjoying the small delights of an east London previously unknown to me.

But I had to get back because after lunch my host, Milos Mali, had agreed to take professional photos of me.http://www.milosmali.com/

Just a few years ago Milos had been a leading fashion photographer, as you will see if you visit his website.    He has also photographed well known actors like Emily Blunt.  Now I find myself on the other side of his lens and its a 1950;s lens at that.  I look forward in time to posting some of the photos here, but not all of them I suspect, as a few were of me nude.  It is a while since I was photographed with a camera with film and not digital.

In the evening I met up with Jo again, this time in Soho.  She was keen to show me Molly Maggs. It's a gay bar with drag performers.  She had learned how on rare occasion I had done drag.

One of the punters took a shine to me.  He was in drag as seemed to fit the event.  I had to, and was glad to accept his effusive compliments.  It was hard to exit the place without his attentions following me.  I never knew I could be so attractive.  On this bitterly cold night we didn't hang around long as we realised it was a Karaoke night and not a proper drag show. 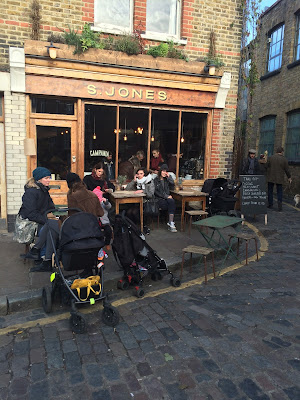 It was my last morning and my tattoos are beginning to show their age.

I went to the famous Columbia Road Flower Market.  http://www.columbiaroad.info/history

It is a beautiful enclave and as is my wont I ended up at a cafe and inevitably found myself chatting to the proprietor, who seemed to like me but not my tattoos.  She was far from unpleasant, in fact she was lovely.  In the background to our conversation was the music of Dionne Warwick and Burt Bacherach. I felt mellow though a little sad to be leaving.

The world likes a street performer and that I think is how most people saw me. 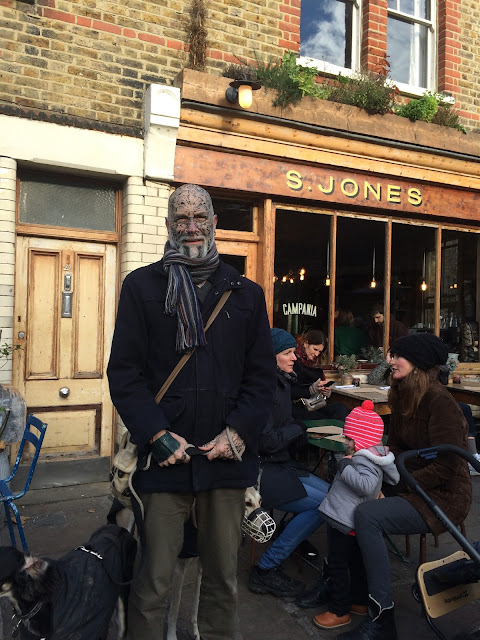 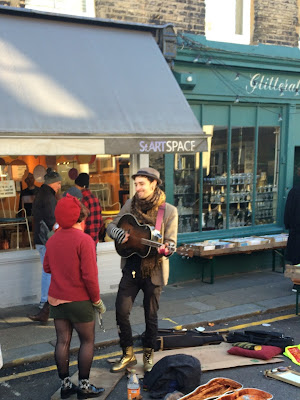 There were huge volumes of flowers for sale and I bought a large bunch for my hosts Caitlin and Milos.  At various places there were street musicians, these above were playing music from the Appalachians.

But it was time to go.  A few hours later I was back home, no trouble on te roads on a Sunday, and that evening faced with the unhappy task of removing my tattoos, though I have hung onto those on my lower arms and close to the neck.  My new style beard stays too.

I had a great time.  I had thought it would be emotionally draining, but actually it was peaceful and restorative.  Good for my sense of self worth.