Horror of horrors, much of the neck tattoo under my chin came off on my pillow last night.  I feel despondent.  I'd banked on three days of perfection.

After breakfast at the local cafe and English Breakfast too and much friendliness from the staff, I headed off for a walk with Twiggy and Suki and ended up at London Fields. 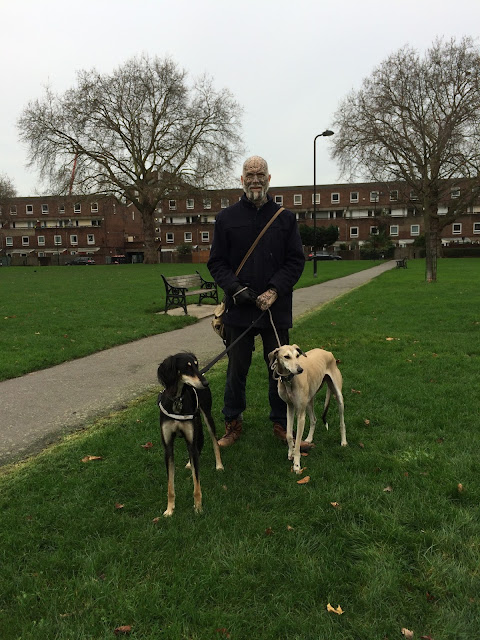 London Fields is an evocative name being the title of Martin Amis's eponymous novel.  https://en.wikipedia.org/wiki/London_Fields_  The place itself is quite forgettable as a dog walk and surrounded by ugly multi-storey buildings, but I met a group of dog walkers who engaged in doggy chat.  It was ultra normal from my point of view - just what happens on many days on my walks at the parks around Bristol.  One of them took a photo of me with the dogs and you can see I look self confident.  I feel self confident.

Then I headed back stopping at a cafe in Broadway Market.  http://broadwaymarket.co.uk/ 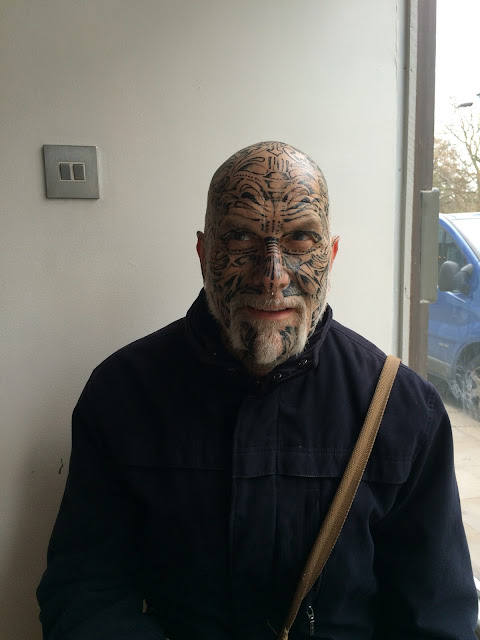 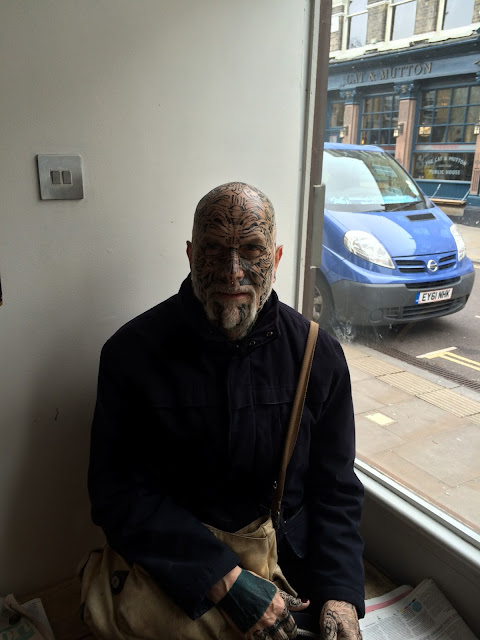 Climpsons cafe was crowded and I found myself sitting close to two South African women. We engaged in conversation and they disclosed what work they were doing in London.  One of them is a photographer and with my phone she took the pictures inside and outside the cafe. 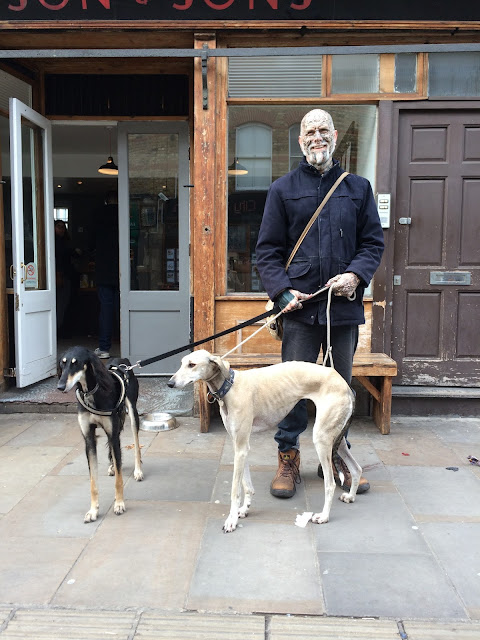 Then a walk along Regents canal  that runs past Broadway Market and back to my accommodation.

Later that day I returned to Broadway Market and had coffee at another cafe, and chatted to the  owner and his French wife.   Mundane I know but this is how I found things.  Close to me there was a young woman working intensely at her laptop, who kept sneaking glances at me.  I tried to catch her eyes but failed.

That evening having again left the dogs with Milos, I went to Brick Lane,  Yes, the title of another famous novel.  http://www.lrb.co.uk/v25/n19/sukhdev-sandhu/come-hungry-leave-edgy

This is the home of a large community of Bengalis and everywhere there were Indian restaurants.  But perversely I chose an Italian restaurant.  The waitress serving me was quick to tell be that she is covered in tattoos, but her uniform covers everything up.  Ludovici, who comes from the heel of Italy, says she is also a body painting model. What do you know!  Lucky old me.

The male Maitre D was much taken by me too and when the bill came there was no charge for the cover or the coffee.  I told him he had missed some items off.  But no, this came free to the tattooed man.

I find that appearing in public the way I feel inside makes me feel quite powerful.