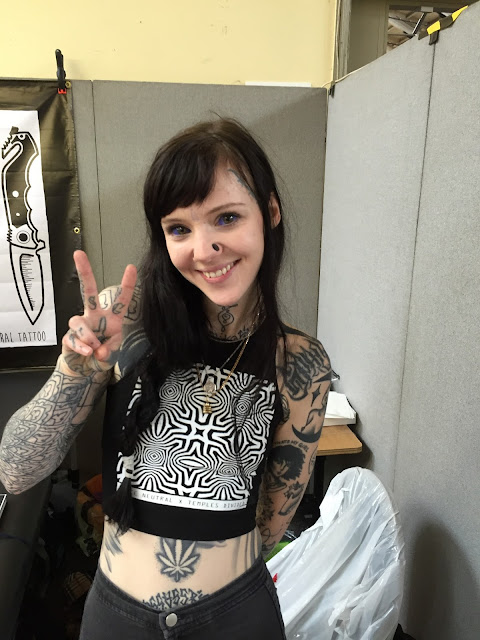 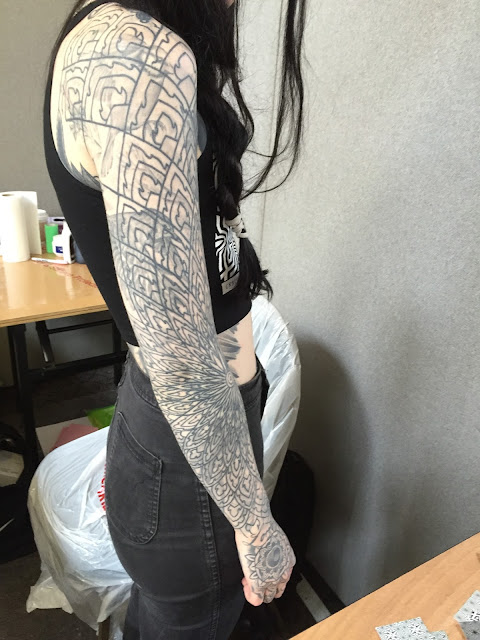 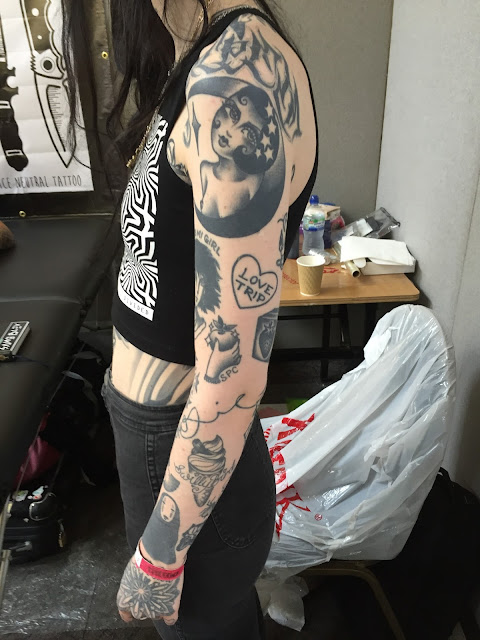 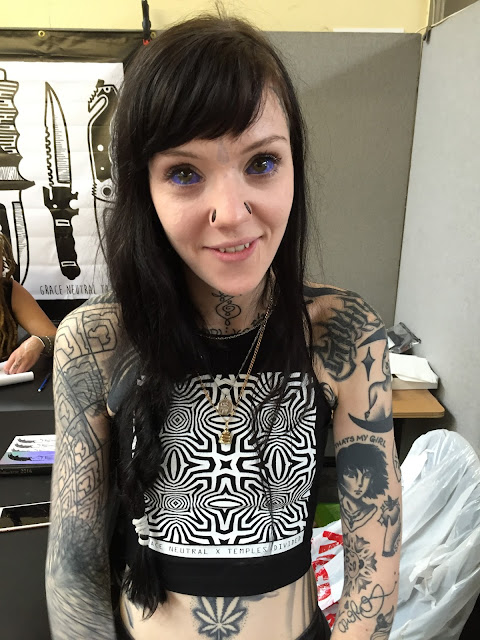 The Bristol Tattoo convention is an unpretentious event, concentrating on tattoos and nothing else. It was not a place where I expected to come across what might be called a tattoo celebrity.

But there was the elfin like Grace Neutral, unmistakeable with her blue and I mean blue eyes, and missing belly button.

I interviewed Grace and when I played it back and did some cross checking with other articles published on her, discovered that I had asked her all the same questions as everyone else, or at least she had told me the same things as she always says to boring people like me.

Not that she looked bored.  She is a very engaging personality and was only too happy to concentrate on helping me out as she stood behind her stall, where she sells her merchandise.

I asked her what next in her body modification world and she told me she is planning to get all the ink on her legs reworked by Guy leTatooer in Toulouse http://guyletatooer.com  She is having her legs extensively changed by him when he visits the UK.  His style specialises in dot work.

Will she get full coverage?  Yes. Her head?  She's not thought about it but she wouldn't rule it out either.

The procedure to get her eyes done involve the use of a syringe.  It is not done in one single go.  She thinks laser eye surgery would make her more squeamish, because in that case you actually get the cornea cut.

She had the whites of her eyes changed to blue in part because she worked with the person who invented the procedure for about three years.  She has also had her tongue split.  There is scarification on her face, very subtlely placed and pretty.  She is thinking of having some more small work done on her face but has no immediate plans

She has her the piercings in her nostrils stretched to 8 mil and her ears and septum but doesn't wear jewellery any more now she is 27.  It's like changes in hairstyles.  As you get older you like different things she says.

I said her extreme modifications would not be a problem for someone who planned to work in the tattoo world for the rest of her life.  Grace said that while tattoos are her bread and butter that she does have other things in her life, like journalism.  She made a documentary in Korea about the illegal tattoo scene, made by i-D on Vice.  https://www.youtube.com/watch?v=tEUWBlUuUHU  Over three million people have watched this video already!.

While she does gain a lot of acceptance from her own generation for her extreme appearance, older people can be judgemental even in today's world.  Western society is better in the last ten years but extensive cosmetic surgery is still more readily accepted that tattoos, scarification and stretched piercings.

She says it is still harder for women.  "I get comments like you are such a pretty young girl, why would you do that?  I don't know any female in the tattoo world that hasn't had some sort of judgement on her because of her sex.  I know mothers who have people turn round to them and say you're a mother, you don't deserve to have children looking like that.  There's a stigma but that's not about tattoos but about the stigma in the mind of the person saying it.  It could be because of gangs or the military."  But things are changing all the time.

And long may the delightful Grace continue to change her body.