Showing posts from March, 2017
Show All

Dan Adcock, the most tattooed lawyer I have ever met. (Watch out - there are some very explicit photos here) 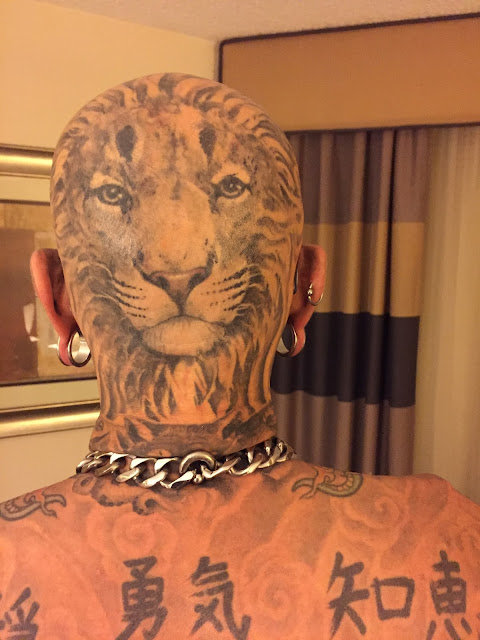 Dan Adcock is from Lubbock Texas and used to have a private legal practice there before he retired. We met at the world Atheist and Agnostic Freethinkers AA convention in Austin Texas back in November.  He is a recovering alcoholic and I was there as a member of Al-Anon.  Unsurprisingly I was immediately drawn to him on first sight in the convention hall. He and I hung out a bit and then one evening went downtown to Sixth Street and did a tour of the tattoo studios and enjoyed a good steak together.  While I chatted up all the tattooed women he found better things to do. Then on the last evening I went to his room at our convention hotel and interviewed him about his totally tattooed self. His head wasn't tattooed until after all his body and his neck.  One day he cut his hair off and went to the Seattle convention in 2009.  The whole outline of the lion was put on.  It took about nine hours over a few sessions to complete the lion.  All this was within the hairline, le
Post a Comment
Read more
More posts