Showing posts from July, 2017
Show All

More on the tattoo exhibition at the National Maritime Museum 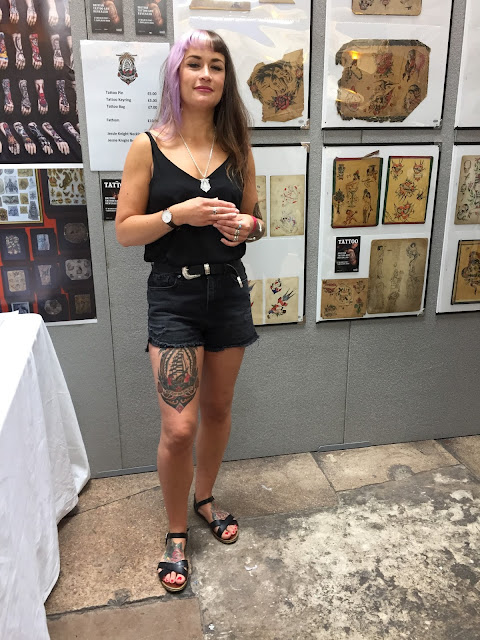 I was very surprised when I arrived at the Bristol Tattoo convention last month to see a stall dedicated to the British Tattoo Art Revealed exhibition at National Maritime Museum in Falmouth. https://nmmc.co.uk/whats-on/event/tattoo-british-tattoo-art-revealedhttps://nmmc.co.uk/whats-on/event/tattoo-british-tattoo-art-revealed/ I visited there on my holiday in April and was delighted a couple of months later to have the chance to meet one of the tattoo exhibition's curators, Derryth Ridge.  She was one was one of those who set everything up and given that she has lots of tattoos it's not hard to see what motivated her. Stuart Slade and Dr Matt Lodder (from Essex University) were the two principal people behind it all.  Stuart worked on the tattoo exhibition in Greenwich about fifteen years ago and felt there was more that could be done with it.  At the same time the museum in Falmouth was looking to expand its audience to the young, a wider audience and to some older pe
Post a Comment
Read more

Sometimes you can spend a few hours being tattooed and there doesn't seem much to show for it.  Jo Harrison just worked on colouring in the heavily line piece and as she dotted around doing background work the changes superficially didn't seem very dramatic. Most of the work was on the back of my arm, which normally I can hardly see. For some reason I struggled on this occasion.  I had as usual used some numbing cream, but it didn't seem to have much effect.  Normally I find it does.  Anyhow, I survived the 3 and half hours session though felt rather sore, which is surprising given that the arm is one of the easiest areas to tattoo. I live in Bristol and Jo's studio is in Birmingham, so I get the train which takes one and a half hours station to station, which means I have to go to the train toilet and start putting on the ointment and then the shrink wrap as I can't do this before I leave the house as it would be too early.  I am not very good at it in thes
Post a Comment
Read more
More posts