My day in Bold Street, Liverpool

I was on a mission to get a couple of Hafada piercings and to get my frenum piercing replaced.  Somehow the bar had come out without my knowing.

I was visiting my son in Aigburth, Liverpool, so got the short train journey into the town centre.  Bold Street years ago was the poshest shopping street in Liverpool.  It definitely is not any more and at the bottom end has some very tacky shops.  But at the top end it as become more and more alternative with lots of tattoo and piercing studios.  Bristol has nothing like this.

So I went to Stigmata where I met Yazz, who was very professional and like any good scouser very chatty and extrovert.  She quickly did the piercings and so far I have no after effect whatsoever. http://www.stigmatapiercing.co.uk

Then I mooched around.  I dropped by at Dr Feelgood Tattoos just off Bold Street.  https://www.facebook.com/drfeelgoodtattoo/

This was unlike any tattoo studio I have ever seen.  It is a large bar with lots of table as you would expect in a bar but not a tattoo studio!  Along one wall are a row of tattoo chairs and on the other side there is a similar stretch of barbers' chairs.  In the evening it is turned into a single use area - a bar that sometimes hosts bands.  It looked really good.

I then went to look at the new "Quiggins round the corner.  The old venue was closed down very controversially a few years ago.  It was great alternative centre with every thing from incense to fetish clothing.  But I was disappointed by the new place.  It looked great but was quiet, looked unoccupied and had no buzz about it.  It just that little bit off the beaten track.

Then I returned to Bold Street, tried to get a waxing but at the one place available it was booked up so the drifted into a place with the extraordinary and unpronounceable  name of Cthulhu Rising.

There I met Dan, seen below. 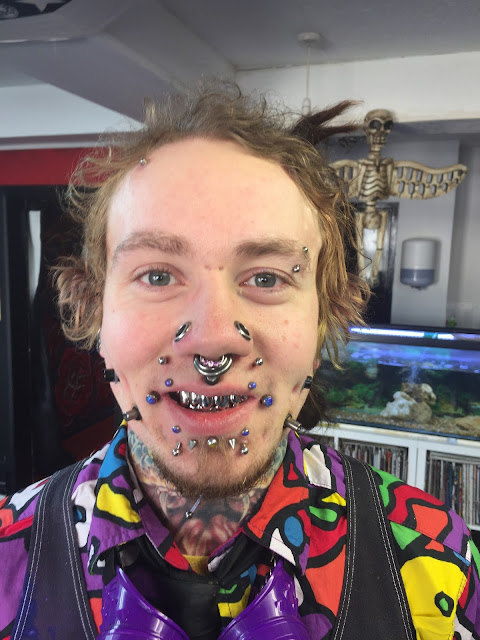 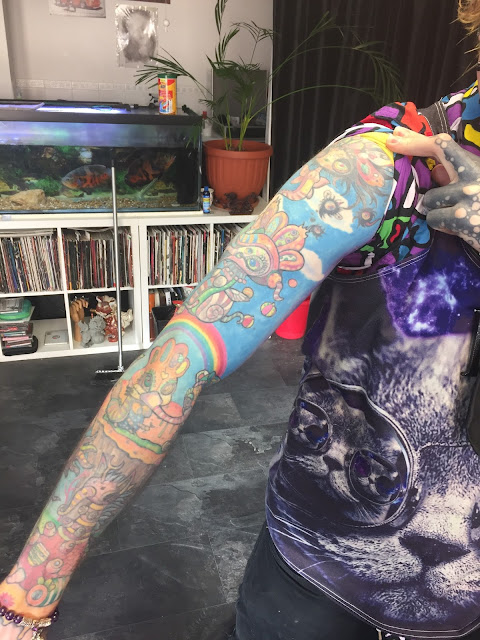 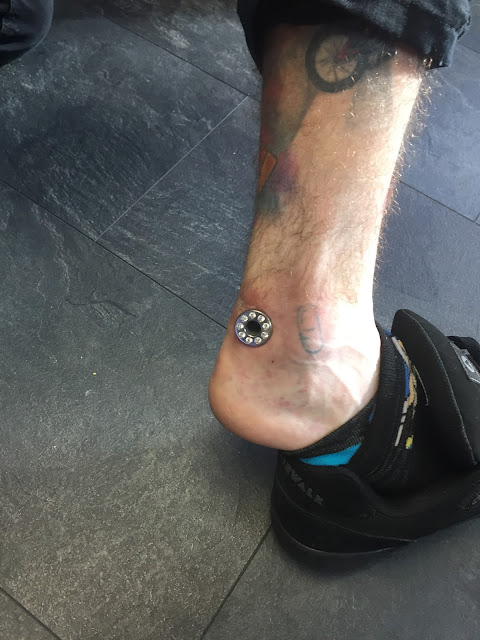 Dan as you might guess is the body piercer.  It was quiet when I was there so we were able to chat.

I don't show it here, but Dan has the most extreme body modification I have ever seen in person.  He pulled his trousers down and showed be a huge tunnel about 90 mm circumference in his scrotum, that in old money is 3 and a half inches.  I don't know how he walks with it.  It required surgery to have it.  It was truly bizarre sight.  He also had multiple piercings in his penis but not the simple frenum and Hafada piercing I have.  Something else I never see before was a piercing of his throat.  I can't imagine how that was done.  If it's not extreme in execution then it doesn't do it for him.

What you can see above is he is extremely pierced on his face and his teeth have all been capped with metal.  Amongst many others he has multiple septum piercings and two tunnels in his nostrils.

He was very proud to show me his big piercing in his ankle.  He says there are no problems with it, but it looks a bit angry to me.

Also in the studio was Ken, who is a tattoo artist.  Ken is from Manchester and a lot older than Dan.  Both of them were very chatty and we covered all sorts of territory including genital tattoos.  Ken encouraged me to get them.  Neither of them had problems with nudity so I stripped off too to show the full extent of my tattoos and piercings.  We had a lot of fun.  I only parted company because I had  arranged to meet my daughter on the Wirral.